Giving up on perfect in every way. Kind of like Mary Poppins – but not. 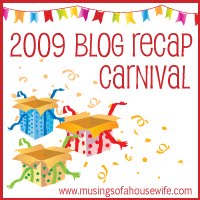 Proof that my brain is fried as I finish up this year: when I read Jo-Lynne’s original post about hosting a carnival of blog recaps, I would have sworn she was doing it on January 31. Next month. I even put it in my fancy schmancy editorial calendar. Because that makes sense.

As you may have guessed, the carnival is today.

But it’s still fun. And it’s still a recap. So I’m still posting. Enjoy, and let me know if you do any sort of 2009 recap on your blog!

January
Lose weight. Read my Bible more. Floss daily. Resolutions made…resolutions broken. I do it every year.
When I look back at my early 2009 posts, I realize that I made a whole lot of excuses for never meeting any of my yearly goals, also called, ahem, resolutions. I’m happy to say I actually did follow through on a few things this year – look for that recap sometime next week.

February
Yes, I am aware that the Superbowl is actually a football game, and the main attraction is – or at least, is supposed to be – the competition between two teams.
I could not care less (And yes, that’s the right way to say it. Think about it. What does it mean if you say you could care less? Anyway.) about football. But the commercials during the Superbowl? Love.

March (not my first post, because that was a recap of Carnival Week)
I don’t mean to be sacrilegious or even disrespectful.
In this post, I questioned Lent. Yup, the whole thing. No, not really. But I did wonder – out loud and in writing – about the point of giving something up for 40 days. This spring, I imagine some of my feelings and thoughts will be different, and it will be interesting to look back on our conversation in March.

April
Annalyn has been doing things on her own timetable since, well, forever. From the day our tiny premature baby doll ripped out her feeding tube and decided to eat on her own, to the weeks I waited for her to smile, then to roll and finally to crawl, this child of mine has reached each new milestone whenever she darn well felt like it.
For a backwards Works for Me Wednesday, I asked for tips to help Annalyn start walking. Little did I know in April that it would be another four months before she walked at all and several months more of physical therapy before we could put the whole situation behind us.

May (not the first post, because this one is more important)
On Thursday night, I watched a soft rock star cry.
If you asked me how blogging has influenced me most, I would have to say it’s opened my eyes to the world of Compassion and world missions. This post was one of a handful I wrote this year about the amazing work Compassion and, specifically, Compassion bloggers are doing around the world. Amazing and life-changing.

June
We’re all about equity of workload at our house. So when we reached Sunday evening of this busy weekend and Mark said he’d mow the yard, of course my contribution was taking five minutes to empty the dishwasher.
While I started this post joking about the inequity of work at our house, the rest of it was actually a recap of the great weekend we had celebrating our anniversary. We took a day trip to Columbia, ate at a semi-fancy restaurant, watched a semi-terrible movie, and generally remembered what it was like to just be together.

July
“Of course!” “I’d love to!” “Sure, no problem.” “Absolutely, yeah, I’ll do it.” I don’t know how many times I’ve said or written these words, only to realize days, weeks or months later that either I have completely dropped the ball on whatever project I agreed to do or I am overwhelmed with the stress involved in completing said task by its deadline.
I left you for a week in July. But I didn’t leave you alone. Though I was enjoying the crazy humidity of a Florida summer, I shared a few guest posts I’d written for other blogs. This one included the ways I keep myself from getting overwhelmed in the world of social media. Hmmm . . . maybe I should re-read this!

August
Whew. What a weekend! And it’s not really even over, although it will be by the time you read this. As I’m typing, I’m sitting on the floor in the Detroit airport, plugged into the wall, full from my sandwich and Mrs. Field’s cookie, and wearing my shades to cut down on the glare from the big airport windows.
In August, I flew to North Carolina for the SheSpeaks conference. It was soooo much fun! First of all, I love traveling by myself (even though, thanks to Delta and my aversion to early morning rising, I missed my original flight). Second of all – and way more importantly – I met my fellow writers for (in)courage and made some wonderful friends (that I’m now looking forward to seeing at Blissdom!).

September
I really don’t see a whole lot of movies. Now Smitty – she’s the movie buff. And I never fail to shock her by my lack of movie experience. Like when she makes a reference to a classic – say, Goonies or Pulp Fiction or Casablanca – and I hang my head and say, “Ummm . . . yeah . . . I haven’t seen that one either.”
Sometimes I get behind. And in those cases, you get a whole lot of something in one giant post. This was one of those occasions, and I reviewed almost a dozen movies at once.

October
Last year was the first year I had to got to dress up my daughter for Halloween. And in my typical fashion, I spent hours researching and brainstorming and planning and budgeting and dreaming. And in the end, she went as a cat. With no tail. And crooked eyeliner-drawn whiskers.
In October, I began a series of carnivals and giveaways to encourage all of us to give up on perfect holidays. It was a blast, and you can just mark your calendars for next year, because we will do it again!

November
Thank you to everyone who participated in Giving Up on a Perfect Halloween! Random.org has spoken, and the winners are . . .
More of the giveaway/carnival stuff. It kind of consumed me and this blog for three months. I think I’ll have to plan better for next year!

December
How does that song go again? It’s the most stressful time of the year?
You know, I have to say: this December was not actually as stressful as others have been. And I like that.

Although . . . it doesn’t explain why my brain was fried enough to think a blog recap would take place a month from now.