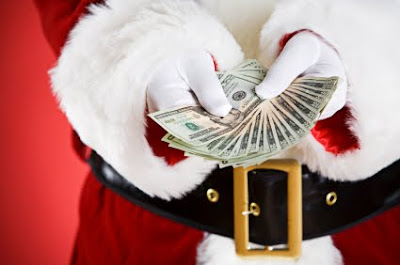 The first year Mark and I were married, we were so excited for Christmas. We were, after all, official grown-ups now, so of course we needed to buy presents for every single person we knew and loved.

And so, out came the credit card.

In the years that followed, that spending strategy became a habit, and we quickly accumulated several maxed-out credit cards and accounts – and then, slowly, paid them off.

For the past few years, as we’ve become more responsible with our money, I still haven’t been sure how to handle Christmas. So we usually wait until the last minute, crossing our fingers for a Christmas bonus, praying for a year-end windfall and eventually juggling our bills and paychecks to scrape out a modest gift budget.

A budget that’s usually blown – and paid for in January . . . and February . . . and sometimes March – because frantic, last-minute shopping is inevitably more expensive than thoughtful purchases made over time.

Next, I made a list of all the “extra” expenses I could think of: Christmas (obviously), birthday presents, Mother’s Day and Father’s Day, new tires and regular oil changes. These were the things that seemed to trip us up every year and put us behind financially, as we scrambled to find money to pay for what shouldn’t have been unexpected expenses.

[Looking back – and forward, to 2010 – I should have included the occasional baby or wedding shower and in-home party (like Pampered Chef, because yes, I actually like these parties).]

After adding up all those expenses and comparing the total amount to our extra paychecks, I was so excited to realize that the amounts matched up pretty well. It wasn’t perfect, and I had to lower adjust the amount I wanted to spend on gifts. But still – I was finally getting a leg up on Christmas (and the whole year’s extra expenses)!

I can’t say the year’s gone perfectly. We still have some under-budgeting and over-spending issues. And I have had to readjust and refigure and rethink several line items. But, I was able to “find” money for Christmas by Thanksgiving, which means . . . (yes, I do feel like this deserves a drum roll) . . . as of Friday, I had almost all of my Christmas shopping done!

Are you finished with your shopping?
How do you budget for Christmas?
And what should I get for my grandma?

If you’re still looking for gift ideas, Stephanie put together a great list of books written by bloggers. And I have a suggestion for Santa over on Blissfully Domestic.

Actually making a Christmas/gift budget works for me. For more good ideas, visit Works for Me Wednesday at We Are THAT Family.