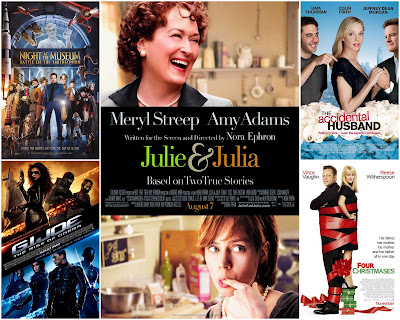 With two long weekends coming up, I anticipate renting more than one movie from the old Box of Red. I’d really like to see Paper Heart, and I’d be lying if I said that watching guinea pigs save the world in G-Force hasn’t crossed my mind.

The Accidental Husband wasn’t terrible. Honestly, it was a pretty typical chick flick. Silly premise introduces boy to girl, who’s already seeing another boy, and so on and so on. But, just like I won’t lie about being intrigued by talking guinea pigs, I won’t lie about this: I’m a big fan of the formulaic romantic comedy.

Jeffrey Dean Morgan was cute, although I couldn’t help but feel sorry for Colin Firth. I mean, is he that stuffy in real life or does he just get stuck playing characters with that personality? Overall, I’d say at least one solid thumb up.

We rented GI Joe: The Rise of Cobra, and we watched it, start to finish. But I do not even know what the movie was about. Granted, I was on the computer part of time. And sure, I only thought it might be good based on two things: 1) I usually like superhero movies and 2) I quite enjoyed Channing Tatum in Step Up. It turns out those facts were not enough to salvage this movie for me.

It was dark (visually, not spiritually) and confusing and boring and silly. Two thumbs down. Sorry, Channing.

I’d heard that Four Christmases was bad. I wouldn’t necessarily say “bad.” But I won’t say “good,” either. The worst part for me was when the main characters visited Vince Vaughn’s dad and brothers. It hit WAY too close to home for me to find it humorous in the least. If you’ve seen this movie, you’ve seen a glimpse of my in-laws. (For the record, they’re not that bad. But still.)

I have been just dying to see Julie & Julia since I saw a preview months ago. Are you kidding me? Food and blogging? You know I’m all over that. And finally, I got to see it last weekend with Chelley.

I wish I’d watched it before 10 pm, because I was way too tired to watch a long movie. But it was worth the wait. I think I’d like to watch it again; I’m pretty sure I missed some good lines in the dialogue.

What I’d heard from several sources was that this movie, more than anything, portrays two solid, loving, realistic marriages. And it did. It was a nice change from most movies and TV! I give this movie two thumbs up, and I can’t wait to see it again.

Sorry not to end on that positive note, but the day after we saw Julie & Julia, we rented another movie starring Amy Adams. Unfortunately, it was not Enchanted. Or, basically, any other movie she’s in. Mark decided we should rent Night at the Museum: Battle of the Smithsonian, and so we did.

It’s probably a good kids movie. I don’t know. For us, though, it was silly. Too silly. I will say that I totally buy Robin Williams as Teddy Roosevelt, and I tend to like Ben Stiller in most of his movies. But Amy Adams seemed to be channeling some fluffy version of Nicole Kidman or something. And the whole story was just silly. I know I already said that, but it’s about all I got.

Except this: The premise of the movie (museum displays coming to life) is far-fetched, of course. But though we could accept that, Mark was not so willing to suspend his disbelief when it came to a certain scene with an old airplane.

I just looked at him and said, “That’s what you’re not buying in this movie?!”

We cracked up. So, if you include that sort of nonsense, I guess I’d have to give this movie a thumb up!

And that’s all, folks. What movies have you rented lately? What movies are you looking forward to watching?