TV to the Rescue: How NBC & USA Saved January 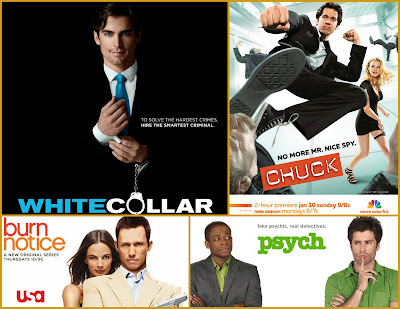 January gives us plenty of reasons to hate it, doesn’t it?

Then it has to go and do something nice, kind of like sending flowers or taking us out to dinner. But better.

Starting tomorrow, it’s bringing back some of my favorite TV shows, and what better way to deal with this crazy weather than slip into some comfy lounge pants, grab some (sugar-free) hot chocolate and flip on the tube?

You might be referring to tomorrow as “Sunday,” but around my house – at least for this week – we’re calling it “Chuck Day.”

With spy intrigue, unrequited romance, intelligent banter and hilarious characters around every corner, Chuck offers a little bit of something for everyone. And for those of us who enjoy the suspenseful, the funny, the clever and the lovey-dovey, well, this is the ultimate combo.

Here’s the basic premise, as described by IMDB: When a twenty-something computer geek inadvertently downloads critical government secrets into his brain, his former college friend turned CIA recruits him as a secret agent, all while keeping him out of evil hands.

Don’t worry if you are new to Chuck. After last season’s game-changing finale, Season Three is the perfect time to start. But you can also check out Chuck 101: The Basics on Give Me My Remote. It includes video clips that will catch you right up – and get you totally psyched for Season Three!

The fun doesn’t stop there, though. The USA Network has made it their business to showcase quirky characters, and my three favorites are coming back this month.

Next Tuesday (January 19) at 9 p.m. CST marks the return of White Collar, the new kid on the USA block. It’s a crime of the week show about an infamous white collar criminal who’s been released from prison in exchange for helping the FBI solve white collar crimes. The two main guys are the typical bickering odd couple, but with a few more layers than normal as they tentatively develop trust despite their differences. (You know, one being a criminal and the other being a law man and all. Those differences.)

The show is clever and funny, and it stars the not-bad-on-the-eyes-at-all Matthew Bomer. Bomer is formerly of Chuck, but he’s not the star with the most interesting resume. Playing the wife of the stuffy FBI agent is Kelly Kapowski herself.

And speaking of bickering odd couples, Psych is back on Wednesday, January 27 at 9 p.m. CST. As I’ve discussed before, watching Shawn and Gus pretend to be psychic while still solving real crimes is one of my favorite ways to pass an hour on Sunday night (I tape – yes, tape – the show so I can watch it with Mark over the weekend.).

If you’re not familiar with Psych but enjoy buddy shows, cop shows or ridiculous pop culture references, you need to put this one on your calendar. Or your DVR. Or wherever you put shows to watch. To promote this upcoming season, the cast sings a little ditty called Private Eyes. And it’s even funnier than Ebony & Ivory from a couple years ago.

To cap off what I’m calling the USA Trifecta, Mark’s favorite show, Burn Notice is back on Thursday, January 21 at 9 p.m. CST. Everything I need to know about being a spy, I learned from Michael Weston and Burn Notice. See, TV can be educational, too.

So, that’s what I’m looking forward to – at least in TV terms – this month. How about you? Do you watch these shows? Are any of your favorites coming back to help you make it through the winter months?