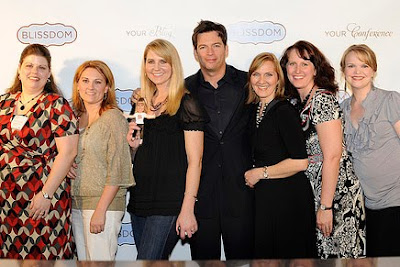 As I mentioned on Facebook, I do realize that I could not possibly look more awkward in this picture. But the fact remains: I am standing just feet away from Harry Connick, Jr. And I have a picture to prove it!

When I heard through the grapevine that our “surprise guest” would be Harry Connick, Jr., I was beyond excited. I have loved him since my days in high school jazz band, and I could not believe he would be performing for me.

You know, me and 500 of my closest blogging friends.

But I’m not to that part yet.

Let’s start at the beginning, shall we? (After all, I tried to keep this simple on Facebook, saying only that I shook his hand. And you people went crazy! And demanded answers! Details! Dirt! Okay, maybe not exactly crazy. But still. I’m pretty sure you want to know more.)

Originally, Harry was scheduled to perform on Saturday night after the final sessions and keynote. But then the New Orleans Saints got in the Superbowl, so Harry had to move our little shindig back a day. To make room for his Superbowl party. Or something.

Whatever the fancy celebrity reason for rescheduling, I’m glad. I was so wiped out by Saturday night that I’m not sure I would have made it to the concert. As it was, I wasn’t convinced that Harry really needed me to put on a dress, heels and eyeliner.

But I did. Which is a good thing. I’d hate to have wobbled into the Opryland’s hip nightclub (do not even start with me about the humor in that statement), past the roped off line and security, in my stretched out jeans and tennis shoes.

The nightclub was exactly what a nightclub should be – and exactly what I don’t love about nightclubs. It was dark and crowded and loud and sweaty. I tried to be sociable; I did. I joined some of my (in)courage friends in a booth in the back. But they’d already paired off into [shouted] conversations, so after snapping a few pictures, I headed back to home base.

Also known as, wherever my roommate Hillary was.

That worked out well, as she’d scoped out a premium spot with a great view of the still-empty stage. Not too long after settling in, the action started.

After some words from Barbara Jones, one of the conference organizers and, I’m pretty sure, the woman responsible for getting Harry to come hang out with us, we watched a video about Harry’s work in New Orleans, rebuilding the music community after Hurricane Katrina.

And then the band strutted onto the stage. I know we were there to see Harry, but I have got to tell you: that trumpet player was ahhhh-mazing! He got the crowd dancing and singing even before Harry stepped on the stage, and two songs later when he played the longest note I’ve ever heard in my life? Well, I was out of breath just listening to him!

Harry and his small band played four songs, finishing up with a football-themed When the Saints Go Marching In. He talked about strong women and building community in New Orleans, and he made some lame jokes that aren’t even worth analyzing here. And it was So. Much. Fun.

I told one friend that I’m not sure anything makes me as happy as live music. And his particular brand of live music – Dixieland jazz, if I’m remembering my Jazz Appreciation lessons right – made it impossible to even remember how bad my feet hurt or how few hours of sleep I’d gotten or how I kind of wished I hadn’t set my drink down and forgotten it.

The music made me dance. It made me sing. It made me grin a goofy grin. And it made me cry. Just a little. Happy tears, of course.

After the first couple of songs, we knew what we had to do – move to the other side of the room, so we could line up to meet him! And that’s exactly what we did – me with shoes in hand, because seriously, those suckers hurt.

I’d like to say that everyone in that dark, crowded room behaved nicely as we formed a line to meet Harry. But apparently manners didn’t fit into everyone’s little party purses. At one point, I started wondering if those women shoving and pushing their way to the front had been given more than two drink tickets. And then I thought that maybe this is what it feels like to be at a European soccer match.

Though I did get squished against the wall, I survived (thanks in part to Lisa). and got my shoes back on my feet, just in time to get to the front of the line. They took six women in at a time, and only the designated photographer was allowed to snap a quick picture.

As we fluttered around Harry, jockeying for position (yes, I lost that battle), I turned and shook his hand. And in that moment, when I could have said so many things, I said, “Thank you.”

And then it was over.

Amy squealed and told me – and then demonstrated ON me – exactly how tightly Harry had held her as we posed. Hillary and I just grinned at each other. And I swore I’d never wash my hand again.

That declaration lasted for about 24 minutes – until we got back to our room for a bathroom break between parties. I mean, not washing would have been gross. And weird.

So there you have it. Not the most thrilling adventure, I’m sure, but it’s my adventure. And now you have all the details as I know them.

But wait – there’s more! Here’s a video of Harry’s final song, from The Southern Plate: