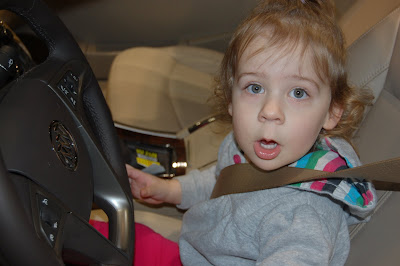 Around 6:00 on Friday, Smitty called me and said, “We weren’t doing anything tonight, were we?”

Secretly, I’m pretty sure we were both hoping the answer was no. She was tired from another crazy week teaching, I was looking forward to a new episode of Wife Swap, and Annalyn was cranky to the max.

So, we agreed that no, we had not made plans. She stayed home, I put Miss Cranky to bed, and then I realized that the new episode of ridiculous reality TV was Super Nanny and not my not-so-secret guilty pleasure, Wife Swap.

Flash forward about 12 hours to Saturday morning. Early. As in, 6:15 a.m. early. Mark’s cell phone blasts out his annoying ring tone and wakes up the whole house. (I’m telling you, it’s a small house!)

For about half an hour, we thought he’d have to go into work all day. And that would have been okay. Kind of. He would have gotten to drive a big truck a long distance, which while not appealing to me at all, is kind of what he likes to do. And the overtime pay would have been helpful.

But as I mentioned earlier, he and Annalyn have been going through withdrawal this past week. So when his manager called back and said he wasn’t going on a “road run” after all, we were all a bit relieved.

Well, I suppose Annalyn wasn’t relieved. She didn’t really know what was going on. But had she known, I’m quite sure she would have been relieved.

Mark went back to sleep, I returned a gillion e-mails, and Annalyn watched enough TV to make up for the fact that her new daycare believes TV is not educational or necessary in a toddler’s life.

Eventually, Mark got up, we ate a late breakfast and then two of us enjoyed the classic weekend activity: naptime.

Right after I got up (yes, we did sleep a lot on Saturday! And it was great.), my mom called. She said my cousin had four free passes to the auto show waiting at will call – and they were all ours.

This worked out perfectly, as we had debated going to the car show earlier that day. Mark thought it would be a great way to spend the late afternoon. I thought it would be a ridiculous waste of money ($20 for an hour of looking at nothing more interesting than cars? No thanks.). But for free? I can do that.

So I called Smitty and asked her on a date.

I know, I know. She should have told me no. It’s rude to ask someone out at the last minute. But it couldn’t be helped this time. We got the tickets last minute!

By the time she got to our house, Annalyn and I had had time to wake up, eat a snack and brush our hair. I’m not sure what Mark did. Oh yeah – he took Miss Annalyn on a walk outside. (Since we were skipping a trip to the park for a trip to the indoor car show. On the first warm Saturday of the year. Sigh.)

We spent an hour looking at cars we can’t afford and reminding Annalyn to HOLD SOMEONE’s HAND! Then we headed to dinner, where we used a gift card. We tried to go for the Free Date Trifecta by using a free Redbox coupon, but Redbox didn’t have any good movies. So we ended the night – all three of us – by watching a (paid for) rented movie on the couch.

It was a good date night.

What did you do this weekend?