Saturday Review: A bunch of movies 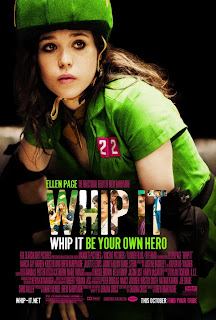 I heart Juno. Even in her other movies.

Does it seem like I watch a lot of movies? My friend Mandy would say so. But then again – and I can say this, because she doesn’t read my blog and that’s what you get – I’d say she never watches movies.

Anyway, this is quite a long list of movies to review, but it’s everything I’ve watched in the last three months. So really, it’s not that many.

Can I just tell you that I really want to segue into the reviews by saying, “Without further ado.” But I find myself wanting to say that a lot, and I’m pretty sure I’ve broken down and written it before. So I’m going to restrain myself.

Sherlock Holmes: Mark, Smitty and I planned to see this movie for months. If we hadn’t had silly family obligations on Christmas Day, we might have gone to see it on opening day. But of course we didn’t. We have priorities, you know.

The movie was really good. It wasn’t as exciting as I expected, but the dry humor was right up my alley and the action scenes were interesting. I didn’t care for a particular scene that involved dead pigs, but I survived. The story itself was okay, but it was mostly the characters and dialogue that I enjoyed. Without giving anything away, I’ll tell you that the way the movie ended left it wide open for a sequel, and I’m sure we’ll want to see that when it comes out.

Beyond a Reasonable Doubt

: I love Redbox. I really do. But sometimes they don’t have any good movies to rent. On a night when this happened, we rented – out of desperation – something we’d never heard of. Beyond a Reasonable Doubt is a remake of a 1956 movie, and it’s about journalism and politics and murder and romance. From the description, it sounded like my kind of movie.

It wasn’t terrible. But it wasn’t great, either. And it certainly didn’t have an unrealistically happy ending, which, as you know, is what I prefer.

Another review I read of this movie mentioned that it’s film noir, and I decided to do a little research. I wasn’t sure exactly what determines that a movie falls into that category. Is it the thunderstorm? The pencil skirts? The low lights or the gravelly voice asking, “What’s your problem, sweetheart?”

It turns out there’s not much of a definition. At least according to Wikipedia, film noir is a difficult genre to define. So much for my independent film study project.

: I promise I’m going to get back to movies I liked here in a minute. But not yet. The Invention of Lying was terrible. The acting wasn’t necessarily terrible, but the premise is just awful.

Basically, a man lives in a world that has never discovered lying. He does and then ends up telling the world a bunch of “lies.” What they didn’t show you in the funny commercials for this movie is that the lies he tells are what we would call religious truths. You know, like God made us. Like God’s in control. Like there’s a heaven and hell.

The movie made me mad, and I considered delving into a deep discussion on the whole thing. But then I remembered that I’m not a communication student with papers to write anymore. And so I didn’t. But if you saw this movie, I’d love to hear what you thought about it.

: Loved it! Yay! I loved this movie! I thought the interactions between characters were written and portrayed authentically, and I thought the story was realistic but still inspiring. I can’t wait to watch it again.

: Mark loves this movie, and it’s been on my list of “I Can’t Believe You Haven’t Seen That Movie; Where Have You Been, You Weirdo?” movies. Lucky for me, it was on cable a few weeks ago and we ran across it in the middle of watching taped episodes of Psych and Burn Notice. So I watched most of it. And now I’ve seen it. And yes, it’s inspiring. Okay?

: I had no desire to see this movie. So Mark rented it one night when I went to scrapbook with some friends. I didn’t end up staying very long at all, and he had just started it when I got home. I watched most of it with him, and I have to say, it was darned funny. Vulgar? Yes. So if that’s not cool with you, don’t rent this one. But if you can stand bad language and need a good (no pun intended, I promise) laugh, you might try it out.

When in Rome: It was a toss-up between this movie and Valentine’s Day when we went out with our good friends, Zac and Mandy. We picked this one, and I’m glad. It was not a good movie in a lot of ways. The acting wasn’t awesome, the premise was silly, and the way it all wrapped up was nothing short of ridiculous.

But did we laugh? Oh my goodness, yes. We laughed throughout the whole movie and all enjoyed ourselves. This may be because we were almost giddy about being out, sans kids, for a whole evening. But it was also just a fun (stupid) movie.

: Last, but not least (see my review of the Lying movie), we rented this last weekend on our family date. (And by family, I mean that Annalyn went to the car show and dinner with us. But she was in bed when we watched this movie. So don’t even start telling me about what she shouldn’t watch. Believe me. That girl isn’t interested in anything that doesn’t involve princesses or Elmo anyway!)

This movie was long and not that funny, and I’m bummed that it wasn’t any better. Also, I kind of wish I had watched a great movie since then, so I wouldn’t be ending on such a Debbie Downer note.

Hmmm. Maybe I should talk about the upcoming movies I want to see? Um, no. Just looked at my word count. I think I’ll stop here, downer or not.

[Disclosure: Some of the links are Amazon affiliate links. That means if you buy the movie, I get a teeny tiny percentage. (Believe me, when I find something that gives me a huge percentage, I’ll tell you!) Interesting fact, while we’re down here talking about these links: Whip It is on sale for less than $10. Just so you know.]