The Week of Quesadillas 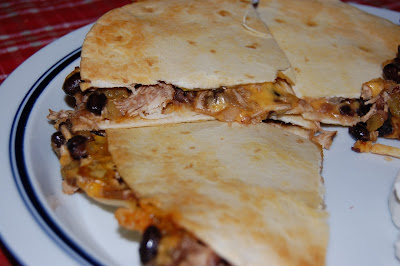 Sometimes making up my own recipe is a great idea. And other times, not so much.

A couple weeks ago, Amy at The Finer Things in Life posted a recipe for a chicken and black bean quesadilla, and it looked so good. It also called for shredded chicken, and as I’ve recently mastered the Top Chef skill of shredding chicken, I decided it was something I needed to make.

Especially because I love quesadillas. I make them with sauteed onions and peppers and cheese. Or sometimes with refried beans and cheese. And I love Applebee’s quesadilla with chicken, bacon and – you guessed it – cheese. So Amy’s chicken and black bean combo sounded like a good idea.

But could I just follow the recipe? Noooo. Of course not.

So last Monday, I baked a pan of chicken. And then I shredded some of it. I looked at it for a minute and decided it needed a little something. So I shook about half a packet of taco seasoning on it. Yeah, that’s better, I thought. (And it was. This isn’t the part that didn’t work out. Just so you know.)

Then I opened up my can of black beans, scooped out some and smashed them. Not completely, though. Beans are actually pretty slippery and kind of hard to smash. Then I added some chopped onion.

I put the beans, then the chicken, then some cheese on a tortilla. I topped it with another tortilla and baked it. Flipped it. Baked some more. And ate it.

So on Tuesday night, I decided to add some green chilies to the mix. And I actually mixed it all together – the chicken, the beans and the chilies. Topped it with cheese, baked, flipped, baked, ate.

So Wednesday night, I gave in and followed Amy’s recipe. I mixed shredded chicken, black beans, salsa and shredded cheese. I put the mixture in tortillas and baked it. (I don’t like making quesadillas in a skillet. Baking just works better for me.)

And you know what? It was really, really good. (Especially when I added a good-sized dollop of sour cream, but let’s be honest: I did that all three nights.)

I’m writing this on Wednesday night, and I can tell you two things. One, I won’t be eating a quesadilla for a while. (Except for tomorrow night, because I’ve got leftovers, okay?) And two, I should’ve just followed the recipe in the first place. Amy knew what she was talking about.

So take it from me Amy. Follow Amy’s recipe for chicken and black bean quesadillas. Don’t forget to mash your black beans with a fork. (Try it and tell me it’s easy. Just tell me that.) And while Amy suggests frying them in a skillet, you can also do what I do and bake it for 10 minutes on each side at 350. Serve with sour cream. And lettuce, if you must.

Do you like quesadillas? What do you put in them?

This post will be linked to Mouthwatering Monday, Tasty Tuesday, Tuesdays at the Table and Tempt My Tummy Tuesday.