The night we ate at Chili’s, not to be confused with that OTHER place. 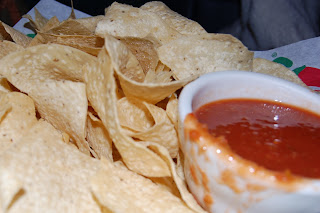 Back in the day – our dating days, that is – Mark decided that he hated a certain Mexican restaurant we’d gone to a couple times. I didn’t mind that so much; Kansas City has plenty of places that serve chile con queso. But the problem was that Mark kept confusing the restaurant he hated – Chi-Chis – with a perfectly decent restaurant – Chili’s.

Chi-Chi’s is not Chili’s. But he wouldn’t listen.

I would suggest Chili’s, thinking of their chicken tortilla soup or the quesadilla explosion salad, and he would say “No, I hate that place.”

And I’d remind him that he actually hated Chi-Chis. But he wouldn’t listen.

Until the day I was asked to review Chili’s for the blog. Suddenly, faced with a gift card and an assignment, he wasn’t so averse to Chili’s-which-is-not-Chi-Chi’s.

So after taking a trip to the car show several weeks ago, Smitty, Mark, Annalyn and I headed to Chili’s.

I pointed out to Mark that they serve fajitas, which is what he eats at every Mexican restaurant (except Chi-Chi’s, because we don’t eat there, you know). I’m not sure if he wasn’t in the mood for fajitas or if he didn’t want to get more confused about just where we were eating, but he opted out of that dish.

Instead, he and Smitty both ordered from Chili’s new Fresh Pairings menu. It’s a good deal: for $9.99, you get an appetizer and an entrée. Smitty got chips and salsa and the Grilled BBQ Chicken Salad, and Mark got the Texas Cheese Fries and the Shiner Bock BBQ Burger. 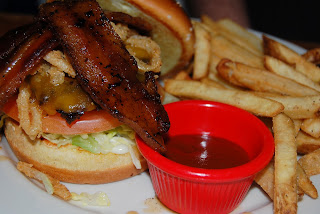 Both of their entrees looked sooo good! And I always love Chili’s chips and salsa (although I’m not a fan of smothered fries in general, which you may find surprising). Mark didn’t care for the Shiner Bock BBQ sauce, but I liked it. It had a vinegar taste to it, and I thought it was good. 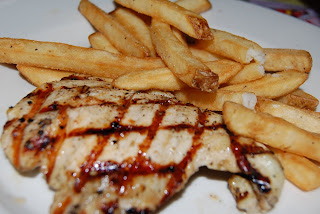 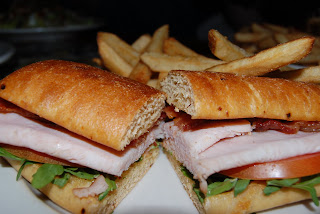 And that was a good thing, because I was actually a little disappointed in my own meal. In an attempt to be healthy, I ordered the Smoked Turkey Sandwich. It wasn’t bad. It was okay. But when we go out for a special dinner, I want something more than “okay.”

Which means I should probably have ordered something other than a turkey sandwich.

And this review wouldn’t be complete without telling how great our waitress was. Annalyn was a little difficult (since it was dangerously close to bedtime), and I was weird (because who takes pictures of their food at a restaurant?). Smitty ordered her salad without bacon, and Mark insisted on getting multiple refills of his iced tea. But our waitress was on top of it – and with a smile.

It’s almost as if she knew I was reviewing the place!

Overall, we really enjoyed our dinner. And I’m pretty sure Mark has finally figured out the difference between that other restaurant and Chili’s.

As part of this review, I have two exciting things to tell you. Click over to my other site to find out (And don’t be skipping this part. You want to check it out!).

Have you ever gotten two restaurants confused before?