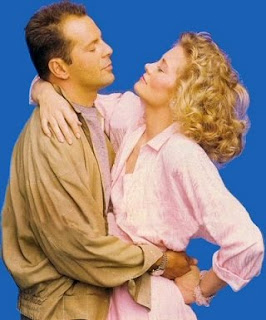 It’s that bittersweet time of year again. No, not graduation time.

And as I think about some of my favorite shows that are coming to an end – at least for the summer – I can’t help but think about David and Maddie.

You know, from Moonlighting

Yep. The ones who ruined it for all of us.

Surely you’ve heard of the Moonlighting effect, right? The so-called rule that says if you allow romantic tension between the male and female lead characters to actually develop into a relationship, then it’s all over.

Never mind that according to most reports, Bruce Willis and Cybil Sheperd hated each other by the end of the show.

But regardless of the reason, most TV shows avoid the situation at all costs. And if you want to know just how extreme “all costs” can be, think back to the last couple of seasons of Gilmore Girls

My very favorite show, Chuck, has bucked the trend and finally (finally!) put Chuck and Sarah together. But most of my other favorites? Still toeing the David and Maddie line.

One surprising coupling (is that weird? Maybe I should find another way to say it…) is Betty and Daniel in the series finale of Ugly Betty. Then again, not so surprising, since they waited until the very, VERY end to give us even a sliver of hope that it might possibly happen after the screen went dark.

Who are your favorite couples – or non-couples – on TV? Either now or in the past. (Feel free to go retro with a Sam and Diane or Tony and Angela.)