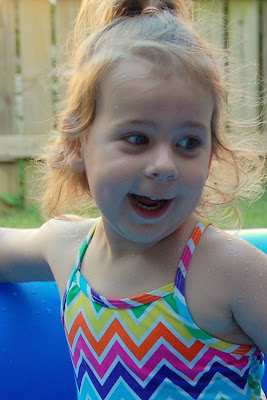 Yesterday a co-worker asked me, “Did you have a good weekend?”

I automatically said yes, but then I started thinking about it. And you know what? I really did.

Annalyn stayed with my parents for a couple days, so I was a free woman on Friday night. Yesterday was Smitty’s birthday, so we planned a night on the town.

Of course, our “night on the town” usually includes Chinese take-out, a rented movie, brownies from a box and some good, old-fashioned Facebook stalking.

This time was different. We went to dinner and managed to stuff ourselves, even though we both ordered salads. (That may or may not have been the second course after chips and queso.) As we walked back to the car, we saw that we’d missed our early movie window.

I said, tentatively, “I know it’s hot, but we could go to First Fridays. You know, downtown with all the art exhibits. Although it’s hot . . .”

Strangely, Smitty thought that sounded like a good idea. [I should point out here that Smitty’s parents didn’t have air conditioning – or hardly ever turned it on or something – when she was growing up. So she’s more accustomed to ridiculous 95-degree days, even when they come in June. In other words, she doesn’t sweat like a linebacker. Unlike me.]

So, for once in our middle-aged lives, we drove ourselves all the way downtown on a Friday night. We managed to find a parking space and started making our way toward the crowd.

As we were walking up the street, I said something to the effect of, “Look at us. We’re cool.”

Smitty said I was not allowed to say that again.

We ran into an old friend [who said that her mom reads my blog and tells her every time I mention her!], checked out some great and not-so-great art and music, and eventually made our way back to the car. And its air conditioning.

Then we continued to buck our same-old, same-old Friday night habits and went to a late movie. Because Smitty loves Gerard Butler (or as his friends – and Smitty – call him, Gerry), we saw Bounty Hunter.

It was not good. But we enjoyed it nonetheless.

Finally, we called it a night, tired and pleased with our adventurous selves. Yes, I’m calling an art fair and late movie “adventurous.”

[Happy birthday, Smitty. You might have seen this coming from a mile away, but I’m so glad to have a friend like you, someone I know like the back of my hand.]

Saturday was eventful in its own way. Mark and I went to my parents’ house for a Work Day. My mom had the idea that before summer gets too hot, we should take turns working together on some of the pesky projects that just require extra help.

So, without going to bed after working all night, Mark helped my dad with a bunch of yard work. [Side note: Summer has already gotten too hot.] And I helped my mom clean out and organize her cedar chest and part of the basement.

Athough “helped” is probably generous. More accurate would be “kept her company and took three boxes of stuff home with me.”

And, oh yeah, suggested my daughter take her nap on the antique couch in the basement instead of her bed upstairs. Which resulted in an antique couch with baby pee on it. *sigh*

After we made our way home, Mark slept for half a day and then we all spent a few hours vegging on the couch. Unfortunately, this means that we missed church. But after three episodes of TLC’s Moving Up, naptime and a trip to the grocery store, we were all feeling pretty refreshed.

Just in time for a BBQ with our small group. I know it’s a cliché to talk about great food and even better fellowship, but what can I say? That’s what we had!

Scott, our host, is an award-winning BBQ-er – and that’s no small feat in Kansas City! And everybody else chipped in with some great dishes, too. For my part, I made Jessie at Vanderbilt Wife’s “magically delicious” corn dip.

We somehow managed to get all the kids and husbands on the deck, so the four of us girls got to eat in relative peace and quiet, visiting and catching up. Then, as soon as we were close to being finished eating, the kids stripped down to their swimsuits and headed to the pool.

On Sunday night, we went to bed tired, covered in bug bites and wondering when we’ll EVER catch up on laundry. But if you asked me again if I had a good weekend, I could only answer one way: Yes, yes, I did.

Did you have a good weekend?