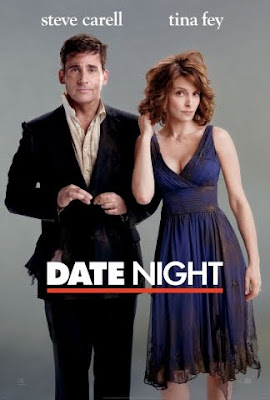 Long version:
From the second I saw that Steve Carell and Tina Fey were starring in a movie together, I’ve been determined to see Date Night. The premise looked funny – boring married couple stumbles into crazy adventure – but it probably wouldn’t have mattered.

Teaming up the lead characters from The Office and 30 Rock was a comedy dream come true.

Of course, I can identify with a boring married couple struggling to maintain a regular date night. I had a hankering to see a movie for a few months before we managed to get this outing on the calendar.

But I never expected to identify with the unexpected adventure part of the movie.

So excited for our upcoming date (and a bit of a control freak planner, if you haven’t heard), I looked online for movie times early in the week. I had free movie passes for the new theater/restaurant combo, but just in case we decided to do something different, I wrote down the showing times for three different theaters.

After hearing a friend’s review of the theater/restaurant and realizing that this date would serve as our anniversary celebration, we decided to eat dinner at Bravo and then go to the movie (instead of eating at the theater while eating).

Side note: I’ve been to Bravo maybe three other times, and I think I’ve gotten the chicken marsala every time. And loved it. But this time, I didn’t love it nearly as much – I only ate about half of it! Next time, I will definitely be ordering myself some pasta.

We enjoyed our dinner, eating and chatting and generally taking our time. Afterwards, we (okay, I) did a little shopping, because the movie didn’t start for another hour. Then, we headed to the theater.

When we got there, though, we found out that the theater wasn’t showing our movie! According to the cashier at the ticket counter, they’d never shown the movie. You’re telling me The Internet was WRONG? WHAT?

The movie we’d planned to see started at 7:35, while the movie at the new theater (right across from Bravo, incidentally) started at 7:10. It was now 7:02. And even though they’re just a mile apart, the traffic between the two theaters is always ridiculous – and even more so on Saturday night.

“Are you still seating for Date Night?” I asked.

No. They were not. Because the movie was sold out. And the next showing wasn’t until 9:25. “Ugh, that’s SO LATE!” I whined to the cashier, sounding like half of a boring married couple on their date night.

Theater #3 had a 9:10 showing, and somehow that seemed infinitely better than the 9:25. We got back in the car and headed downtown. This time I was driving, so I dropped Mark off at the door while I headed to the parking garage.

And then my cell phone rang. It was Mark. The movie was sold out. Already. And had been for hours.

Seriously? What the heck? It’s not like we were trying to see Harry Potter 14 or something! But apparently I was not the only person whose Facebook friends had been raving about Date Night.

We drove BACK to the theater/restaurant, bought tickets for the oh-so-late 9:25 movie. Then we spent the next hour walking around Marshall’s like a regular boring married couple.

Finally we got to see the movie. And while we didn’t like the new theater/restaurant and their logistics/seating/etc. (and did I mention that I left our free passes at home, because we’d decided to go to the other theater?), we loved the movie. It might have been past our bedtime, but we laughed through the whole thing!

Only a few times did it seem like we were watching Michael Scott and Liz Lemon. And only one scene – in a strip club of sorts – was annoyingly inappropriate for this boring married couple’s viewing. But married or not, if you’ve ever been bored with your life and longed for some excitement, you’ll identify with these funny characters.

Overall, Date Night (and our date night) was so funny and so worth our driving all around town to get tickets!