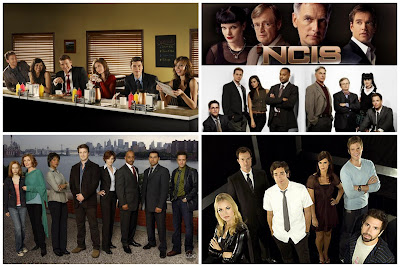 You didn’t think I’d forget to talk about season finales, did you? I mean, I don’t watch Lost [insert shock and awe here], but it was still a big couple of weeks in the world of TV.

I’ve debated how to write about this. I even made myself a little spreadsheet to sort out my thoughts. [Yes, that’s nerdy to the max. No, it didn’t help. Yes, I just said “to the max.”]

Separate posts for each show seemed like overkill. I don’t want to seem like a TV addict or anything. (Ha! Like you haven’t already picked up on that!) But cramming all my deep thoughts (yes, about TV) into one post seemed impractical.

And so, I’m left with the only logical option: Make a big list and keep my thoughts brief. Okay. Well, big lists, you know I can do. Brief thoughts is another subject, though. Here goes nothing . . .

[SPOILER ALERT: If you aren’t caught up on your DVR-ed shows, just bookmark this crucial post and come back after you’ve watched your stories.]

Ugly Betty (series finale) – I’ve confessed before my addiction to endings. So it should come as no surprise that when I heard that not only had Ugly Betty gotten a lot better than the season that finally drove me away, but it would be ending this year, I was back on the Betty Boat. I watched the last three episodes, and I have to say: I’m so glad I did. It was fun, and I loved the way they wrapped everything up in the end. I know it’s ridiculously punny, but here it is anyway: Ugly Betty went out in style.

How I Met Your Mother – Sadly, I didn’t love this season of HIMYM. The musical episode was {yes, I’m doing it} legendary. And I’m glad Barney and Robin didn’t stay together. But overall, it was a little boring, and that includes the finale. I hope the gang is back to full force funny next year.

Chuck – That. Was. Awesome!! Yes, the odds were good that I’d love the finale of my favorite show, but you never know. After waiting almost a whole week to watch it, I finally did – and it was worth the wait! Chuck’s finale resolved several big storylines and then opened another couple of big ones. I can’t wait for the fall!

Castle – I really enjoy this show. Sure, it has a mystery of the week, but the snappy dialogue and the likeable characters are what bring me back every week. The finale was great, even though it left me frustrated. The two main characters – Castle and Beckett – have great chemistry and a solid partnership. So of course the audience is led into wanting a romantic relationship, and of course the writers denied us that resolution yet again. I know, such a cliché, but I love it anyway.

NCIS – One of my very favorite shows, NCIS did not let me down in the finale. I love it when shows are faithful to their own history, referring to past storylines, relationships or revelations, and NCIS does this so well. The finale was full of action and development, but still left us with plenty of questions, including: How, exactly, can Mike Franks shoot a gun with his thumb?

Parenthood – This new show is well-written and beautifully acted, and I just love it. The characters are raw and true-to-life, and while I don’t love watching all that fighting, dang, it’s realistic! The finale did a great job of wrapping up some storylines but leaving enough open that I’m anxious for next season. Parenthood is a keeper.

Modern Family – Funny. So funny. The finale wasn’t anything special; a lot of reviews I read suggested the vacation episode would have been a better way to end the season. Regardless, this show is by far the breakout of the season, no matter who you ask.

Bones – I love the idea of a year apart and starting next season one year down the road. Am I happy that Booth and Bones are headed to separate parts of the world? No. But I think it’s a good solution, a good way for them to deal with their feelings and confusion. All that said, I will not be happy if one of them brings back a souvenir on two legs.

Community – Now that was a surprise ending! Okay, maybe not. If you’ve paid attention to the not-so-subtle clues the show gave over the last half of the season, Jeff and Annie’s last-minute clinch probably wasn’t totally shocking. Maybe even less shocking than Britta turning all girly and psycho and weird. Still, well-played, Community. Well-played.

The Office – What is up with my formerly favorite shows having disappointing seasons? Way to go, Jim and Pam, proving the Moonlighting theorists right and making the show all boring and unfunny. Ugh. I’m not loving The Office these days and think they should call it a day when Steve Carell leaves.

I also watched Cougar Town, which is WAY better than it sounds (and the producer is even considering changing the name before it returns in the fall), 30 Rock, which is funny as all get out but still not must-see for me, and Big Bang Theory, which is crazy smart funny but unfortunately didn’t make it to my must-see list this year.

What did I leave out? Did you watch Fringe? 24? LOST? And how about that Grey’s finale?! Tell me all about your favorite shows and their finales in the comments!