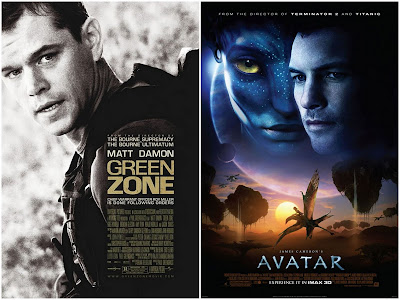 To prove that I don’t only watch dumb romantic comedies (like those in last week’s Saturday Review), today’s post is about two serious movies.

Or, should I say, movies with Very Serious Messages.

A quick summary: I found both movies to be interesting, thought-provoking and frustrating. And one of them was way too long.

: Seriously, could this movie BE any longer? More than two and a half hours seems to be overkill, if you ask me. But I’ll move past that, I suppose. After all, the beauty of waiting seven months to see a major blockbuster that everyone else has already seen is that you get to pause it whenever you need a bathroom break. Or a snack.

The effects were pretty cool, and the animated part wasn’t as weird or childish as I was afraid it would be. Smitty said seeing it in 3D wasn’t as good as she expected, but I still wish I could have tried it.

The characters were good – likeable enough that I cared about them for the good part of three hours. (I’m just saying!) It was interesting to see who “played” Neytiri, the female lead, since we only saw her avatar. Also interesting was the way the male lead somehow got cuter toward the end of the movie. Maybe it was the constant contrast between his weird blue avatar form and his normal, scruffier by the minute human form?

But the most important part of Avatar is, of course, its Very Serious Message. I read several articles back when the movie was released comparing the storyline to Pocahontas

, which as an expert these days on all things Disney Princess-related, I can see. What it really reminded me of, though, was Fern Gully

Remember that movie? Back when I thought Christian Slater was cute and Robin Williams hadn’t gotten weird yet, I loved that movie.

Watching Avatar – and remembering Fern Gully – reminded me how much I love this Earth that God has created. And even made me think I should try being a little more “green.”

So, score one for the Very Serious Message, I suppose.

: I didn’t finish this movie nearly as inspired. As a matter of fact, I finished it frustrated and confused. And embarrassed by my lack of knowledge regarding the war in Iraq.

I know Mark was annoyed with me, because I kept making him pause the movie. Not for snacks this time, but to ask questions.

“Is that really what happened?”
“Is that true?”
“Does high-value targets mean what I think it does?”
“What if that is what happened? Why would they do that?”
“Do you think that Iraqi is right?”

I’m the first to admit that I’m ignorant when it comes to politics. I shouldn’t be. It’s a shame that I am. It’s hard to figure out what’s true and important and real when it comes to these topics, though. And I tell you what: watching movies like this don’t make it any easier.

A review in Salon.com says it perfectly: “Green Zone [is] a fictional movie teased from the tangle of facts, almost-facts and squelched facts surrounding the search for weapons of mass destruction in the early days of the Iraq war… This is a movie that recognizes there’s no straight line to the truth, which is part of what makes it vaguely unsatisfying – though it’s also what keeps it honest.”

This time, the Very Serious Message almost completely overshadowed the movie itself for me. It didn’t have cool special effects, unless you count the shaky cam and gritty film. And Matt Damon was his usual Jason Bourne self, but none of the characters – Damon included – were so compelling or lovable that I really cared about what happened to them.

I was too busy trying to figure out which part of the movie was based on truth and which part was completely made up. Even now, after reading several reviews and commentaries, I’m not sure.

Which I guess was the point.

I’m really enjoying this movie binge that we’ve been on lately. But I have got to find something to watch that is both entertaining and good! (As opposed to entertaining and lousy, or difficult and good. In case you weren’t paying attention.)

Have you seen these movies? Did you find their Very Serious Messages to be too heavy-handed or just right?