I don’t know what kind of girl I am.

Yes, it’s another quote from Juno. I like the movie, okay? For some reason, it just moved me. I mean, yes, of course, it’s really funny. And fo-shizzle, it has groovy music. (Just kidding – I don’t talk like that.) But parts of it – and the whole theme – were moving.

Anyway, this part of the movie is very brief. It happens right after Juno has told her parents that she’s pregnant. Her dad, understandably disappointed, says he thought she was the kind of girl who “knew when to say when.”

And that’s when Juno says it: “I don’t know what kind of girl I am.”

When I saw that the first time, I just kind of sat back in my seat and thought, “Huh.” (Eloquent, right?) Seriously, though, it hit me that what she was saying wasn’t just another witty or flippant statement. At least to me, it was more. It summed up a lot of “stuff” I’ve been thinking and feeling lately.

See, I’ve been struggling for a few months. Well, really for several months. It’s been the culmination of my 10-year high school reunion, being laid off from my job that I didn’t even like that much, having my first baby, taking another job that I don’t really love, and now facing my 30th birthday.

But I haven’t figured out how to say any of this. Maybe it’s because (and I’ve been waiting for the right time to use this great quote!), like Stephen King said, “The most important things are the hardest to say, because words diminish them.”

However, I still have this crazy urge to share with you (or, I should say, anyone who will listen or read) what I’m thinking and feeling. So, here goes.

I’m not who I think I should be. I’m not where I want to be. But to be perfectly honest, I’m not really sure who I am OR who I want to be. And of course, if I don’t know those things, I clearly don’t know where I want to be or what I am supposed to be either. What I do know is that God made me who I am, whoever that is. And I’m 100% sure He made me to do something BIG. I just have no idea what my “BIG thing” is!

So there it is. My big crisis. Dilemma. Question. Situation. Whatever it is.

If you’re wondering why I decided to tell you about it tonight – and even if you’re not – it’s because I heard a new song. It’s by a Christian artist, Kelly Pease. I’m sure she’s new, because I can’t find much info about her. I’m going to post the lyrics here, but I might have a few wrong. Because I couldn’t find the lyrics online…so I listened to her song on MySpace over and over until I could catch all the words. Anyway, here it is:

So long I’ve been trying to please so many people,
Most of whom don’t even know my name.
Somehow if I could only be what they are buying or selling…
In my trying I found out just who I am.

Somewhere along the way I bought into some crazy notion
That I could be to everybody all things.
So long I’ve been beating my head against the wall…
Through my trying I was crying, “Show me who I am.” 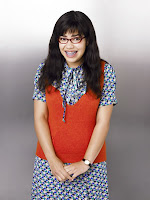 More on all that later. But for now, I’ll leave you with one last quote that I think fits in with all this jumbled stuff rattling around in my brain (from the wisdom of Ugly Betty): “Maybe you should stop worrying about what you’re supposed to be…and just be.”