Regrets, she’s had a few. 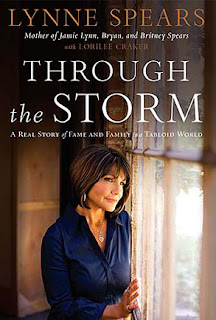 Book Review: Lynne Spears’ Through the Storm: A Real Story of Fame and Family in a Tabloid World

How many times have I thought when seeing the latest report of a Britney Spears disaster, “Where is that girl’s mother?” Or even, “How does someone so talented get so crazy?” Reading this book answered the first question thoroughly and the second question briefly.

If you’re looking for a tell-all about Britney the pop princess, look elsewhere. If you’re expecting advice from a mother of three, buy another book. But if you’re intrigued by a family whose lives have been drastically changed, repeatedly, by circumstances and by choices, this might be the book for you. And if you’d like to know what place God and faith have in the Spears family, this book is for you.

I really think Lynne Spears wrote this book to get her side of the Spears Family Story into the mainstream press. After watching her daughters, her husband and herself be torn to pieces in ink, Lynne has spoken up about who the Spears family truly is – where they came from, what they’ve dealt with, and in many ways, how they came to the point we see today in the tabloids.

I thought this book was interesting, showing how a child from a small town could rise to stardom, despite her parents’ humble beginnings and very human frailties. And showing how, incredible as it is, a person could completely shut out her own parents, despite needing them more than ever.

Even though Lynne tells the story of Britney’s rise and decline, as well as Jamie Lynn’s teen pregnancy, she’s telling it from her perspective. So if gritty details are what you’re after, you’ll be disappointed. (To be honest, I was as curious as the next person who watches The Soup but refuses to buy People magazine unless I’m taking a flight somewhere – yes, those are my anti-celebrity gossip standards.) This book is more about Lynne and who she is – not a bad mom, not a “stage mom,” not a neglectful parent. But a naïve, nurturing Christian mother and teacher who loves her kids no matter what’s going on in their lives.

Is Lynne Spears a little defensive in this book? Sure, but I can’t blame her if she goes a little overboard describing both the great parts of her life and the hard parts. Was Lynne Spears naive? Absolutely, but she’s the first to admit it. Does this book humanize each member of the Spears family? Yes, it does that, too. And maybe THAT is what Lynne was after all along.

A few things that I found most intriguing/interesting/striking/thought-provoking in this book:

What about you? Read any good books lately? Got any insights on life of the rich, famous and tragic?