The Danger of Reruns and Hulu 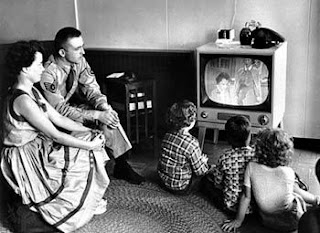 Last year’s writers’ strike was a terrible event for all involved. Actors were out of work, writers were out of money, and suffering most of all, viewers like you and me were out of entertainment. Thankfully, just as we were all about to give up hope and the great art of television forever, the parties in dispute came to an agreement.

I won’t pretend to know what that agreement entailed. Actually, I won’t even pretend to know exactly what the whole strike was about in the first place. But I think it had something to do with online television shows. And money. It definitely had to do with money.

No matter what it was about, though, I’ve noticed since then that more TV shows are available online. And for free! It almost makes me want to give up my VCR.

Just kidding. We’re using that thing until it dies. (And considering it’s been around since Mark saved up his allowance to buy it in 1989, that could really be any day now. Any. Day.)

As I’ve mentioned before, I’ve really tried to keep the number of shows I watch regularly to a minimum this year, in an effort to keep my television addiction – I mean, affection – under control. It’s an effort that’s worked pretty well so far and has been helpful when it comes to vital tasks like blogging and laundry. The downfall of that choice, however, is that when one of “my shows” is a rerun, I have nowhere to turn for mindless distraction.

Enter the holidays. And weeks of reruns. And a little website called Hulu.

Now, it’s not that I have lots of extra time or much free time at all. And I certainly haven’t crossed everything – or much of anything – off my December to-do list. But when faced with the thought of watching NO television last night, well, I just couldn’t handle it.

So I watched last week’s episode of The Office. Heh. Funny stuff, that.

And then…then, I turned to Hulu. Hulu, who says, “Watch your favorites. Anytime. For free.” Um, hello? What’s better than that?

So, I clicked. And vegged. And most certainly did not do any laundry. Two hours and 20 minutes later, I made myself log off. And dragged myself to bed.

And dreamed sweet dreams about my new friend, Hulu.

Stay tuned for scenes from next week’s very special episode of “How Photoqueen Wasted Away Another Evening.”

Do you watch TV online? Or do you DVR? Anyone else have an ancient VCR? [For those of you tempted to ask, no, I do not have an 8-track player or a turntable for those big, floppy CDs. I do, however, have a cassette player. So now you don’t have to ask.]