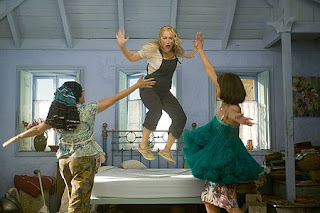 As a birthday gift to me, Mark generously said he would watch any girly movie I wanted. So we rented Mamma Mia.

Just in case you don’t know the premise, this musical about a girl trying to find her father before her wedding is based on songs by ABBA and until recently was a stage production. Both Amber and Smitty have seen it on stage and enjoyed it, so I had high hopes for the movie version. Plus, it stars Meryl Streep, and she’s pretty much fantastic in everything.

I was not disappointed. Mamma Mia was great! I told Mark it was like a Disney cartoon for grown-ups – it was pretty and magical and fun.

My favorite part was the friendships portrayed by the two generations of women in the movie. Meryl Streep’s character, a single mother, is reunited with her two best friends from younger days, and Amanda Seyfried’s character, a young woman about to marry, has her two best friends by her side as bridesmaids. The two trios love each other with abandon and sincerity, supporting the main characters when they face difficult decisions and their repercussions – and also just plain having silly, girly fun! 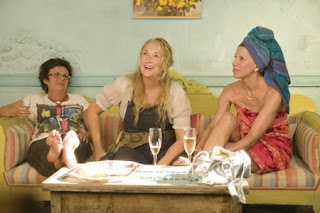 My least favorite part of the movie was poor Pierce Brosnan’s singing. He was wretched, and all I’ve heard is the final product. I can’t imagine how he sounded before coaching and rehearsal and any digital enhancing!

All in all, this movie was a lot of fun. I agree with my mom, who said it’s a “feel-good movie,” and I say rent this one today. Just don’t turn it off after the final scene – the credits are just an extension of the movie with more singing, dancing and fun!

What are your favorite movies about friendship?