If I Could Turn Back Ti-ohm 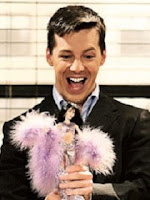 When Will & Grace ended their final season a few years ago, they had a Very Special Going Away Goodbye Episode. It showed clips of their funniest bits over the show’s lifetime, including the many scenes involving one or all of the cast singing. Though those extremely talented actors have more impressive scenes, one of my favorites is the short bit Jack had with Cher. He thinks she’s an impersonator (or drag queen) and tries to show her how to properly sing “If I Could Turn Back Time.” You can watch it here.

It seems like sitcoms these days don’t include nearly as much music as they used to. Of course, you can point to How I Met Your Mother’s tribute to “I Would Walk 500 Miles,” but even though that episode was…wait for it…legendary, the actors weren’t really making music themselves. (See the clip here.)

So for you, I’ve spent my entire morning on YouTube and have some great musical sitcom memories to share. Oh, the things I do for you.

My mom was a big fan of The Monkees. So I learned to love Davy Jones early in life. But my favorite TV memory of that short British singer (5’3”!!) was on My Two Dads. (And I’d totally forgotten that Paul Reiser was in this show!) Check it out here. 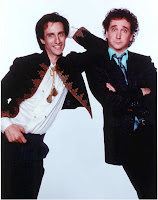 Another one of my favorite shows from back in the day was Perfect Strangers. There’s just something so loveable about that wacky Balki Bartokomous! Turns out that he was always singing something, but the one that’s stuck with me all these years is a brief bit of him singing “What’s Love Got to Do With It” while dusting. If I’m ever home alone and dusting (not that this is a common occurrence, let me assure you!), you can bet I’m belting out that song. See it here at 1:02 (it’s a long montage). And for more musical fun with Larry and Balki, go here and here.

One of Photobaby’s favorite sounds to make is “Bah.” So naturally, I respond by singing “Bah-bah-bah, Bah-Barbara Ann.” And for some reason, this has brought Bob Saget to mind. Well, mystery solved. While I remembered the episode of Full House where the whole Tanner family goes to a Beach Boys concert and sings “Kokomo” (see it here), I’d forgotten that they also sang “Barbara Ann.”

I found this on a desperate YouTube search for Danny Tanner singing Moon River at the end of a date. I swear it exists. But despite the trillions of videos online with Full House musical bits, I found no trace of this one. So it’s possible I just made it up. (Anyone else remember that?) 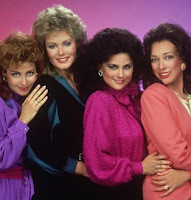 Finally, one of the most striking musical scenes in a sitcom, at least in my opinion: the four Designing Women lip synching “Ain’t No Mountain High Enough.” You can see their talent show performance here, but to get the full effect, you can learn about why the song meant to much to those ladies here. This episode was one of the first times I learned about – and was moved and disturbed by – domestic violence.

On a lighter note, when I grow up, I SO want to be Julia Sugarbaker!