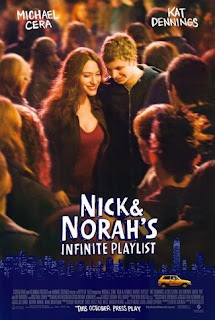 A few weeks ago, Smitty came over and we rented Nick & Norah’s Infinite Playlist. Because that’s what these two happening ladies do on a Friday night – pick up Chinese and a teeny-bopper movie from the Redbox.

I’ve got to tell you: I really enjoyed this movie. It was smart, funny and sweet. But not overly sweet, not cheesy. But just good, start to finish (including the DVD extras, such as bloopers and a quirky but funny hand puppet reenactment).

And I kind of love Michael Cera. I loved him in Juno, and he played the same sort of character in this movie. He was a sweet, smart, funny guy who just needs a little help in the girl department. I believe the term is “adorkable.” And he is.

One of the lines I laughed the hardest at was after he’d said something obviously stupid to the girl he likes. You could see the embarrassment on his face and then the quiet desperation when he said, “Can we go straight to laughing about this?”

In short, the movie is about a group of high school kids who bar hop in New York City (I know. I didn’t say this was an uplifting film full of family values, okay?), trying to discover the location of an alternative rock band’s performance. Finding Where’s Fluffy is their initial goal, but several characters end up finding more than that. The main two – Nick and Norah – start a relationship, of course. And if it’s not the cutest little relationship ever, I just don’t know what is.

Nick & Norah’s Infinite Playlist is a great illustration of the journey being more valuable than the destination. And just in case you don’t catch on, the last lines of the movie spell it out for the viewer:

Norah: Are you sad that we missed it?
Nick: We didn’t miss it. This is it.

I didn’t realize until doing research for this review that Nick & Norah’s Infinite Playlist began as a book. Since movies never live up to books, I’m glad I hadn’t read this one. But of course I’ve put it on my to-read list.

For a more in-depth review, Time magazine writes a good one, even concluding that, “In the 1930s, Hollywood had The Thin Man, with the married couple Nick and Nora Charles as the epitome of Manhattan swank. Though this Nick and Norah have a lot more angst, they’re just as worth watching, admiring and cuddling up to.”