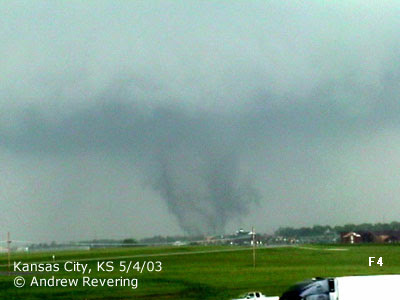 Six years ago, Mark and I had just bought our first house. The week before we were scheduled to make the big move, three friends helped us move a few boxes into the house.

We’d gone to church that morning in Lawrence, our last Sunday at the church we’d just begun to love. Then we headed to lunch.

When we got out of the car at the restaurant, we were surprised at how cool it had gotten. We felt a little underdressed in our skirts and shorts, but we figured we’d sweat soon enough moving the boxes around.

After eating lunch and unloading the cars at our new house, we took a break in our unfurnished living room. And then Mark’s phone rang.

It was his brother, who lives 20 minutes away, calling about the tornado.

What tornado, we asked.

Mark could hear sirens in the background of his brother’s call, but it was quiet in our new neighborhood. After they hung up, we decided to see what we could find out. As one of our friends went out to the car to listen to the radio for news, Mark and I just looked at each other. And then around the house. And back at each other.

We had just bought a house without a basement. With big windows in every room. In Missouri. 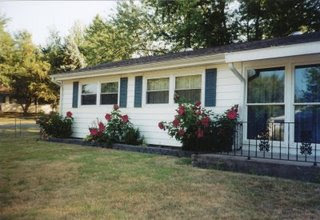 After we found a news report on the radio, we learned that we were under a tornado warning. That’s the bad one – although that day, I wasn’t quite sure which is worse, the watch or the warning.

One of our friends, Julia, called her parents, who lived about 5 minutes away, to make sure they were in their basement. They assured her that they were fine and mentioned that we could all come over if we wanted.

After what in retrospect seems like a lot of pointless debate, we climbed into our three cars and followed Julia to her parents’ house.

Our caravan drove at a reasonable speed, following all traffic rules and noticing that yeah, maybe the sky did look a little green.

We pulled into Julia’s parents’ driveway, parked and walked up to the door. Her dad, Alan, welcomed us, and we followed him into the living room, where we gathered around the TV. With one eye on the meteorologist on screen, we asked Alan if he thought we should go to the basement.

Poof! At that moment, the power went out. Our hearts dropped. And we headed to the stairs.

Single file, we jogged down the steep stairs, and Alan directed us to the most inner room of the basement. Before we were all crammed into that room, though . . .

Bam! The storm hit the house. My friend Stacy screamed. We all crouched to the floor.

And then it was quiet.

We stood up and looked at each other. And then we looked out into the main room of the basement. And saw a tree, sticking through the wall.

Holding hands, hugging arms, we filed back up the stairs and walked out the garage to see the damage.

Stepping outside, we surveyed the street. And that’s when I got a little teary-eyed. A little shaky. Branches and debris were everywhere. We could barely see our cars; they were covered in tree litter.

And a huge old tree across the street had been completely uprooted and tossed across the neighbors’ yard. 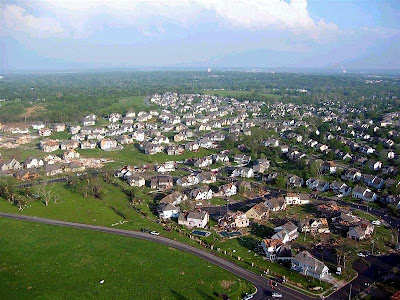 Tornado damage near our house
After we collected ourselves and had exclaimed and sniffled ourselves out, we decided to go see if our basement-less house was still standing. Just as slowly as we’d traveled away from our new house, we rushed back to it.

It was untouched. We found a few pieces of insulation in the yard (not sure where they came from), but our neighborhood had not been hit. Over the next few weeks, I would realize that the exact path we took to Julia’s parents’ house was the same one the tornado took, touching down one street over from the house we went to for safe shelter.

We spent the next couple of hours trying to drive to Julia’s house and, after being turned away by the police trying to direct traffic around the vast damage, trying to get back to her parents’ house. We finally gave up trying to drive in, parked the car and walked back into the neighborhood. Then we concentrated on calling our friends and family to assure them we were fine and to make sure they were, too.

Starting as an F1 and ending as an F4, our storm was part of a series of tornadoes that swept much of the country that May. We were so blessed to be kept safe. Many, many others were not so lucky. According to Wikipedia (yes, I know, shut up), a total of 86 tornadoes touched down in Kansas, Missouri, Arkansas and Tennessee, making May 4, 2003 one of the largest single-day outbreaks in history. Thirty-eight people were killed, and nearly 400 were injured by the tornadoes. Here’s one video, although you can find dozens more.

And that is why our next house will have a basement.