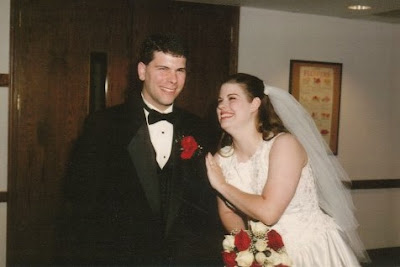 The first time Mark asked me to marry him, I was 16 years old. We were both in high school, and I was pretty sure he was joking.

Three years later, he asked again. This time, with a ring that I’d picked out and a spaghetti dinner he was so proud of.

I said yes both times.

Mark and I began as an unlikely couple, way back in 1994. As one classmate so delicately put it, what was a goody two shoes (that would be me) doing with such a troublemaker (yes, that was Mark)?

She was right. Rude, but right. And yet, somehow, it did work. We worked.

Today is the 10th anniversary of our wedding. That stressful, exciting, exhausting, wonderful, emotional day seems so long ago. But at the same time, I’m quite positive it happened just last year.

(Because I cannot possibly be old enough to have been married for a decade. Right?)

Mark and I went to the same high school in a small town. We were only two years apart, but we didn’t exactly run in the same crowd. (Although, it turns out, he was neighbors with my best friend, Smitty, and another best friend, David. And cousins with one of my best girlfriends, Kimi. I said it was a Small Town.)

We met at a football game, where I learned that Mark had a crush on one of my friends. Three of us sophomores talked to this senior, hinting that we wanted a ride to the big party taking place after the game. My friend Mindy and I chickened out in the end, because, well, you remember the goody two shoes remark from earlier, right?

But it seems I made an impression on young Mark anyway. I’d like to think it was my beauty and wit (I remember liking him most of all because he laughed at my jokes. Because I’m funny, people!) . . . but I have a feeling it might have been the annoying way I kept singing the song that was stuck in my head that night. It was 1994, so it could have been worse. I could have sung Sheryl Crow or [shudder] Crash Test Dummies. But instead, I sang – over and over and over – What’s Going On by 4 Non Blondes.

Anyway, our first date was the Homecoming Dance. It was also my first date. And . . . as my mother dragged out of me the next morning, my first kiss.

Since we didn’t deal so well with the long-distance (while I was in college, and he was working at home), we decided the only logical thing to do was get married.

I was 19 when we made that decision. A freshman in college. You can just imagine how excited my mom was.

But get married we did. And I finished college. And we moved. And changed jobs. And fought – a lot. And figured out how to live with each other. And remembered how to laugh together. And learned how to cry together.

In the last ten years, we’ve lived in three apartments, two duplexes and one house. We’ve gone to more funerals than I want to remember, including his mom’s. I graduated from college, started graduate school, quit graduate school. Mark started and stopped college a handful of times. We’ve both lost jobs. We shared dreams, wishes, ideas, plans and prayers. We adopted two cats. We had a beautiful baby girl. We traveled to Seattle, Colorado, Branson, Florida, Virginia and Tennessee. And, oh yeah, more than a few road trips to Kansas, Des Moines and St. Louis.

We’ve racked up credit card debt – and paid it off. We’ve planted a church – and left several churches. We’ve made friends and lost friends. We’ve said things we regret, left things unsaid that should have been spoken, thrown things across the room and stormed out of the house in anger. And we’ve taken classes and gone to seminars and sat through counseling and read books – and learned how to live and love better than we ever thought possible.

Mark is an amazing man – a loving, accepting and forgiving, helpful, funny man. He has supported me through all sorts of ups and downs, and he’s helped me grow into a better person. He’s an incredible father, and the best husband I could want.

And he’s still making me spaghetti dinners to be proud of.

Happy anniversary, Mark. I love you – a lot.