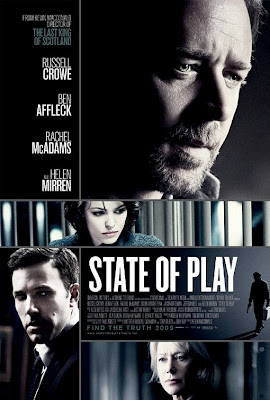 Last weekend, Mark and I were treated to a date night, courtesy of some movie passes and a babysitter. I’d had the free passes since my birthday. Five months ago. So we were due for a good movie. And we had decided that the perfect movie for us to spend the passes and the date night on was Duplicity.

Unfortunately, it stopped playing in our theaters on the Wednesday before our date.

Thankfully, we’d seen previews for State of Play. After all, what good would a date night be if it began in an argument over the wisdom of using free movie passes to see a Matthew McConaughey movie?

State of Play has been called “an intelligent adult thriller about the death of newspapers.” Entertainment Weekly said, “State of Play has enough layers of insidious surprise . . . to keep even a seasoned  political-corruption buff guessing.” And TV Guide wrote, “[B]y cleverly raising questions about print versus online media, the screenwriters manage to instill the tried-and-true political thriller with a satisfying contemporary twist. . . . [It] is the kind of thriller that starts with a bang and throws in enough twists to tie your brain in knots as the layers of deception are stripped away to pose some genuinely frightening questions.”

I agree with all of that, but I figure you probably came here to see what I thought.

First, the actors. I think there must be something wrong when Russell Crowe is more appealing to me than Ben Affleck. Perhaps I’m getting old? (Don’t answer that.) I don’t know. I’m not saying Ben is not a good actor. I thought he was just fine in this movie. But Russell was better. By far.

Yes, I’m on a first-name basis with these people. Aren’t you?

Rachel McAdams was adorable and, in my opinion though not many of the critics’, believable. I realize that I related to her character mainly because she’s like me – young(ish), a blogger, fairly new in her career and anxious to learn more and move up. But that’s enough for me. I liked her. And I liked the friendship and respect that grew between her character and Russell’s.

Other main actors in this movie were Helen Mirren, Robin Wright Penn, Jason Bateman and Jeff Daniels. Ms. Mirren (um, no, no first name here) was lovely as usual. Robin was bland and forgettable, but she always is to me; we actually looked her up when we got home, because I just wasn’t sure she really was Jenny. And we’ve seen Forrest Gump a few hundred dozen times. Please believe me and don’t make Mark do his Forrest impressions to prove it. Jason was hilarious, and Jeff was not so hot. Or maybe it was his (Jeff’s) character. Either way, I didn’t like what he had going on.

Second, the story. State of Play was based on a 2003 BBC miniseries that was apparently well-loved. I’d never heard of it. But then again, I couldn’t find BBC on my TV if you paid me. (Nothing against the British and their TV. I just don’t watch it. We have enough addicting shows here in the U.S., thankyouverymuch!)

This movie was about a Senator whose staffer – and, it turns out, mistress – is murdered and the journalists who solve the mystery. Because the police only solve mysteries on TV, I guess. The movie is a commentary on several issues: the death of print journalism, the commercializing of the news, the corruption of our politicians, the difficulty of marriage, the scary possibilities of corporations funding – and even creating – wars.

That’s a lot to worry about at once, but the movie itself did a pretty good job of fleshing out these problems and showing us implications for each one. For me, corporately funded wars are just too scary to consider and corrupt politicians are not at all surprising anymore. So what I focused on – and what the movie focuses on, too – is the message it sends about today’s journalism. 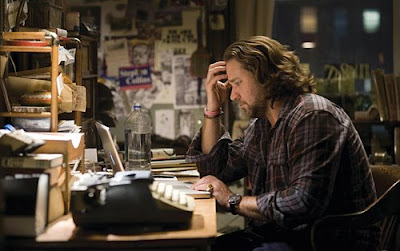 Third, the message. I work in public relations. But for most of my high school years – and one short semester at college – I was determined to be a journalist. The hard-hitting, scoop-finding, world-saving type of journalist. Think CNN. Think foreign correspondent. Think Up Close & Personal. But I changed my mind, got sidetracked, ended up somewhere else.

My industry, however, works hand in hand with journalism. My colleagues and I do most of what we do with journalists in mind (for better or, sometimes, worse). So the industry is still close to my heart, and as a blogger and a PR professional, I know well the battle print journalists are fighting today.

So this issue wasn’t news to me (ha! Little pun intended.). What I did leave the movie wondering is this: are movie reporters real? What I mean is – do the stereotypical journalists exist? Did they ever? Has it ever been about “just the facts, ma’am,” or was that all just a dream, a fantasy, a built-up image of what we thought those people should be and do?

What do you think?

And finally, the bottom line. State of Play was a great movie, and I recommend it to anyone who wants to watch a mostly serious, sometimes funny, thought-provoking and action-filled movie.