Saturday Review: Ghosts of Girlfriends Past 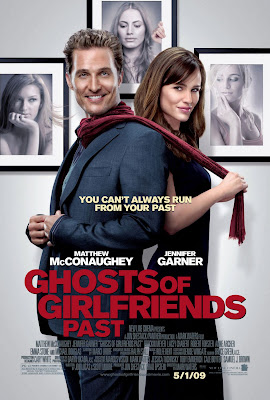 When Mark and I took a day trip to Columbia, we took advantage of our baby-free time by catching an afternoon movie. Mark indulged me, and we saw the only chick flick playing: Ghosts of Girlfriends Past.

Usually when I write a movie review, I check out Metacritic.com to see what other critics have said. In addition to aggregating reviews from a couple dozen newspapers, magazines and websites, it also assigns a numeric value to each review to give the movies a rank from 0 to 100.

Ghosts of Girlfriends Past earned a 34, which is in the “Generally Negative Reviews” category.

Well, here’s the thing. First of all, I like chick flicks. I enjoy romantic comedies. Second of all, I like to be entertained by movies, and that often (but not always, really!) means unrealistic situations that lead to unrealistic happy endings. Third, I went into this one with pretty low expectations.

And last but most important, I was so thrilled to have a day with Mark to celebrate our anniversary that everything seemed better than normal.

So, with all that said, I really enjoyed this movie. It was silly, cheesy, maybe even a little offensive – but you know what? It was fun. It was funny. It had Matthew McConaughey, playing . . . himself. And I liked it.

The basic premise is that Connor Mead, a celebrity photographer, is a playboy headed down the same path his late Uncle Wayne took through life. When he goes home for his younger brother’s wedding, he faces his first – and only – love and then just happens to be visited by several ghosts.
Like I said, McConaughey plays his usual slow-talking, charming man slut who surely has a heart of gold under those slick clothes and hard muscles. His childhood friend, first love and present-day romantic temptation is played by Jennifer Garner. She is sweet, she is cute, and I like her. Michael Douglas, as a Hugh Hefner-ish Uncle Wayne, is not sweet or cute. But he is really funny, playing his role with a wink and a sideways grin.

You’ve seen this story before – both the Christmas Carol story and the jerk guy turns into sweetheart for his woman story. But if you’re not opposed to seeing those stories combined into a cheese-fest, you might like this one, too.

But just to make sure you’re getting the full story, here are a few critic quotes:

Wow . . . poor Matthew McConaughey. These critics don’t like him. They really don’t like him! (Please read that in my best Sally Fields voice.)

Have you seen this movie? What did you think? Was it as bad as they say? Or did you, like me, laugh in spite of all the cheese and sleaze?