We’re all about equity of workload at our house. So when we reached Sunday evening of this busy weekend and Mark said he’d mow the yard, of course my contribution was taking five minutes to empty the dishwasher.

Never mind that my to-do/wish list for the weekend had no less than 27 items, while his simply read, “Mow the yard.”

Ah well, it doesn’t really matter. When it came down to it, we decided to just lay on the couch and watch a movie. As anyone with a yard or dishes knows, it will all be there in the morning.

We had a great anniversary weekend. Despite a scare with a rash, Annalyn was healthy enough to spend the weekend with my parents. (According to our pediatrician’s nurse, the rash was roseola, which apparently is harmless. And it went away after a day or two.)

I began the weekend by taking full advantage of my Friday evening alone, doing such wild and crazy things as going to Hobby Lobby and Archiver’s to shop for scrapbooking supplies, driving through Burger King and splurging on a Whopper Jr., balancing my checkbook and watching Stacy and Clinton give Blossom a makeover. I was living the life, I tell you.

For our big anniversary date day, Mark and I drove over to Columbia. We didn’t go to school there, although we both wanted to at various points in our lives, but we did live 90 minutes north. In the middle of nowhere. So we spent those early years of our marriage traveling to Columbia whenever we needed to shop at a mall, see a movie in a theater with more than three screens or take a random road trip on a lazy Saturday afternoon.

More than once during our day, I noticed how we didn’t lack for topics of conversation. I love that. I love that even after all these years, we still want to talk to each other. Of course, even though our drive there was full of talking and laughing, our drive back was more jamming to the oldies on the radio and sitting in comfortable (or, for me, falling asleep) silence.

We ate lunch at a winery near Columbia. I’d made sure to have reservations, because I saw that they were having an arts and crafts festival there on Saturday. Turns out we didn’t need reservations and the festival may not have been the most successful of events, but, oh well. Our lunch was great, and the bartender was kind enough to take our picture. And even though we laughed at the fancy-schmany menu that used about 12 words to describe mashed potatoes, even Mark enjoyed the “frou-frou crap” that we ordered. 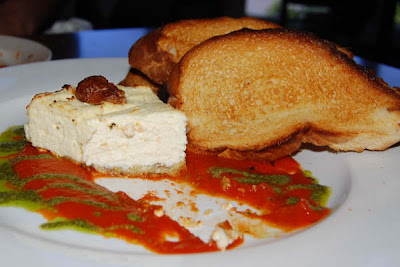 Then we headed on in to Columbia, but since it was a crazy 90-something degrees out, we decided to figure out a Plan B. (Plan A was walking around downtown, checking out all the little shops and maybe getting some ice cream.) Plan B turned out to be doing a little shopping at the mall (Yes, we have malls here, but how often do we get to shop without a stroller and diaper bag along for the ride?) and then seeing a movie.

After taking in our old person (but cheap!) matinee, we headed downtown to walk around. The sun wasn’t so high, and the weather was a bit more tolerable. Of course, by then, the stores were mostly closed, so we just walked for a few blocks, admired the many bikes parked outside the many bars and dodged a few smelly hippies. (Ah, how I love college towns!)

And then, the best part of our day: Shakespeare’s. See, the whole reason for Saturday’s field trip was to eat cheap pizza and snag some new plastic cups. And eat pizza and get cups we did. Because we’re classy that way. (Hey! We did start the day at a winery!) Anyway. We also sat and watched the college kids walk around and wondered if we’d ever really been that young. And we debated whether we like Shakespeare’s pizza because it’s good or because it reminds us of that fun time in life. And as we remembered that we’d always said we’d like to live in Columbia someday, we considered whether or not a college town would be a good place to raise a family. And that led us to look through all the pictures of Annalyn on our camera and talk about how much we missed her. 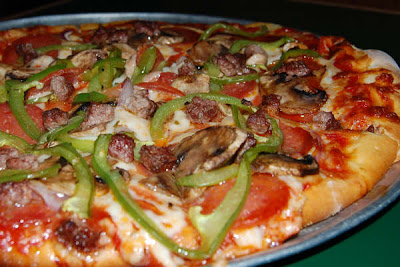 Here’s our pizza. I considered showing you the empty pan that we were left with afterwards. But that’s just too embarassing!

Things have changed, I guess. But you know, that pizza was delicious. So maybe some things stay the same. All in all, it was a good weekend, and we vowed to do it more often.

What’s your favorite place to get pizza? And how was your weekend?