Is that even a word? 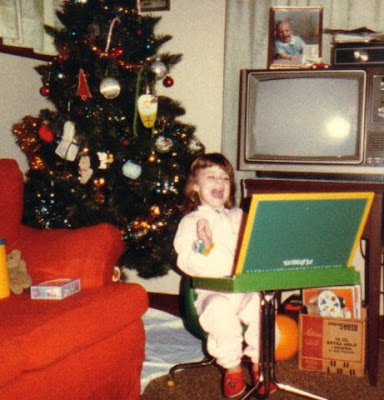 Look how excited I was to get a desk for Christmas.
The better to play school with, of course!

I am such a nerd. And I’m okay with that. After all, if I wasn’t the proud owner of no less than four AP Stylebooks, who would my friend Kevin call when he has a grammar emergency?

Last night, for example, he called wondering how exactly to write about a range of numbers and if AP had finally changed their ruling on capital-w Web site.

[For the three of you who are wondering, numbers are still written as words when under 10 and written as numerals when 10 or higher. And AP stands firm on the hideous W.]

Lately I’ve been proofreading a lot more projects at work, so I’ve been spending even more time with my trusty AP guide. And I’ve noticed – sadly, for the first time – that my dictionary of choice should be Merriam-Webster’s.

Since my copy of Webster’s was given to me as a high school graduation gift, I’ve been using the online version for the most up-to-date pronunciations, spellings and definitions.

Little did I know just how updated the dictionary was. Until I found the list of new words, that is.

For example, “sock puppet” was added to the dictionary in 1959. But it’s on the list of New Words in 2009. Apparently this year enlarged our understanding of the puppet made of sock, though. Because a second definition has been added.

Did you know a sock puppet is also a false online identity used for deceptive purposes? I had no idea.

Not surprisingly, making the list are media favorites staycation, carbon footprint and reggaeton. Just kidding. I am not accusing the media of bringing us reggaeton, an apparently popular kind of music from Puerto Rico that “combines rap with Caribbean rhythms.”

And I’m sure you won’t be shocked to know that webisode, vlog and frenemy are now accepted parts of the English language.

But waterboarding? Did we need to resurrect that one? Weird.

So, there you have it, folks. Further proof of my nerdiness. For more, check out these oldies but goodies. Good stuff there.