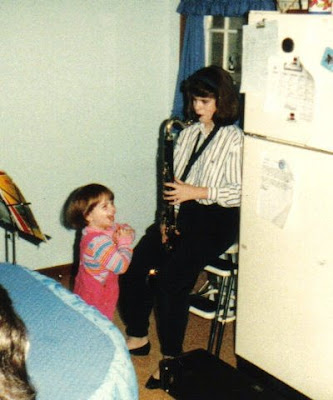 Clearly, I’ve always known good music. Here I am, playing the bass clarinet, circa 1990. No, it’s not a saxophone. Yes, my pants are tight-rolled.

Mark said it doesn’t count as “knowing the words” if I can only say things like “play on, playa” and “hey-ah, hey-ah, hey-AHHH” in rhythm.

Whatev. You know I’m down with Dre.

What? You didn’t? Huh. Well, as a little party favor for our 30th birthday party slash reunion, Smitty and I decided to make mix tapes. On CDs.

That was until she discovered ’97 was the year of both MMMBop and the Spice Girls. It was also before I discovered that that catchy ditty, “Mouth,” is actually a dirty song.

However, we persevered. Because for our friends, only the best.

And by “the best,” I mean lots of cream cheese and pop tunes from the late 90s.

Now that I’ve whipped you into a frenzy of curiosity, I’ll reveal the songs that made Saturday’s playlist. Don’t even tell me these don’t take you back. Back all the way to . . . 1997.

After we put together this tape CD – but before I realized I’d exhausted my iTunes budget – we looked up top songs of 1978. Just for kicks.

Because when you get to the ripe old age of 30, that’s what you do on a Friday night for kicks.

It was a good year for music. But what I found later that night was that the real year for good tunes was 1989. As I said to Mark, “Your brother is so lucky! He graduated in the year that has all my favorite songs!”

Because I’m pretty sure my brother-in-law jammed to Paula Abdul, Tiffany and yes, New Kids on the Block.

Not really. But maybe Big Mama can appreciate this list, as she, too, apparently came of age in that wonderful musical year.

In case you aren’t as familiar with the sounds of ’89, here are my top 20 faves (in no particular order, because I’m writing this late at night and I have no brain power left for that sort of thing). And yes, I am cheating and linking this up to OhAmanda’s Top Ten Tuesday.

What’s your favorite year for music?