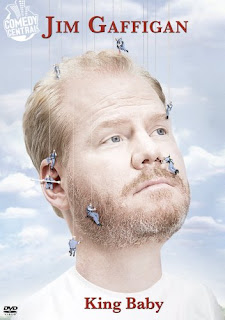 From bologna and bacon to Waffle House and bean bag chairs, Jim Gaffigan is here again to talk about the important things in life. King Baby was filmed during his stand-up tour as a follow-up to his first Comedy Central special, Beyond the Pale.

Seriously, I think this guy is hilarious. He’s got a dry sense of humor and deadpan delivery that cracks me up.

And then there’s the fact that his topics of choice involve being white, pudgy, lazy, “indoorsy” and what my mom calls “a good eater.” I’m not saying I identify with all those characteristics, but it’s possible that many of his jokes hit home.

I just love this guy. And so does Mark. So, in a moment of brilliance, I decided to buy King Baby, Gaffigan’s newest stand-up DVD, for Father’s Day.

As DVD Talk writes, “Jim Gaffigan is a bit of a throwback, as far as today’s stand-ups go . . . Gaffigan does quiet, old-fashioned observational humor, and does it without the use of profanity. Hailing from Indiana and maintaining a Midwestern point-of-view, his comic persona is that of a slightly bewildered pudgy white guy whose desires are primarily limited to comfort food and a good nap. That he has become such a phenomenally successful comic speaks to the strength of his material and his distinctive delivery; like Bob Newhart in the 60s, he’s so uncool, he’s cool.”

And if there’s something I can really get behind, it’s cool uncoolness.

For a taste of King Baby (hmm…there’s just something weird about that statement…), here’s a video about the most beautiful thing on earth: bacon.

And if you haven’t heard Gaffigan’s bit about Hot Pockets, please, watch it now.