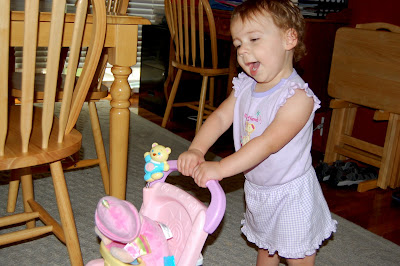 Yesterday, we had two – count ’em, two – therapy appointments. Believe it or not, neither session included a couch and memories of my childhood.

No, we had two different physical therapy appointments for Annalyn. I was actually excited for them since we’ve had the major stroller development.
The first appointment went well until the last 10 minutes. That would be the time when Miss Judy (as we call the therapist) decided to force Annalyn to take a few steps toward me. She even provided a sticker to motivate her. It had Hello Kitty on it.
But strangely enough, after an hour of showing off and playing with the therapy toys, and about two hours past her normal naptime, my sweet, calm daughter was not interested in taking a few more steps.
And she, ahem, let us know about it. Loudly. I’m sure you know what I mean. 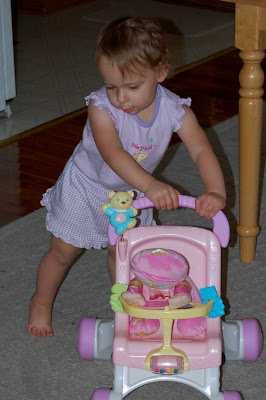 So that wasn’t the best end to Therapy Appointment #1. But overall, Miss Judy was appropriately impressed with Annalyn’s progress.

The second appointment was a full evaluation by a state therapy program that we’ve heard great things about. They actually come to your house for therapy sessions, and of course, as a state program, it’s a lot cheaper than the top children’s hospital in our area.
It turns out that I really don’t pay attention to my child. Because if I did? I’m sure I would have known how to answer questions like “How many blocks can she stack?” “Can she follow two consecutive commands?” “Can she match an object to its picture?”
By the end of that appointment, I felt like I didn’t even know what “object” and “picture” even meant anymore!
Thankfully, I didn’t have to reflect long when asked, “Does she share well? Take turns with toys?”
Ummm, not so much.
Anyway, the good news and bad news is that Annalyn does qualify for their services. Good, because I’m anxious (to say the least) for this walking progress to continue. Bad, because the eval confirms that she is, indeed, very far behind in her development.
On the bright side, her cognitive development is above average. As if I needed a test to tell me that!
(C’mon. I’m telling you about how my 20-month-old can’t walk. Let me talk about how smart she is for a second at least!) 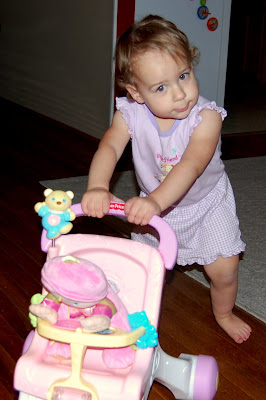 Anyway. Therapy Day went well. And in just over a day, I will have the privilege of hearing a legend sing. At least that’s what I’m told. Leroy Van Dyke is known for, among many other things, what Billboard magazine calls “the biggest country single of all time”: Walk on By.
I know it’s going to be a fun concert. But the thing is . . . I don’t actually know this song. I don’t think it’s the same as this Walk on By. And it’s definitely not this Chicago song that I keep thinking of, which apparently does not even share the song’s name.
So this week, from pushing a baby stroller named “Beep Beep” to listening to an 80-something-year-old man sing the Auctioneer Song, walking on by works for me.