Last night, Mark and I took a cranky-pants toddler who is obsessed with “walk!” and “steps!” to a little birthday dinner. After watching several games of Pac-Man, cruising up and down the table, chewing on some cheese bread and spitting it out, and generally causing chaos, Mark decided to take her home.

For about 3.2 minutes, Annalyn was happy. She walked around and around the Pac-Man game, saying, “Wheeee!” It’s the little things in life, you know.
My job was to get a box for our pizza, pay our bill and say “happy birthday, good to see you and goodbye.”

That was totally my intention, and I probably would have made good on those goals if my cousin Craig hadn’t started talking politics.

Normally I avoid those conversations – nay, debates – like the proverbial plague. Honestly, I don’t enjoy talking politics with most people, and you know combining family and politics is a dangerous cocktail.

Regardless, I stayed last night and debated chatted. And . . . left with a headache. And cold pizza. 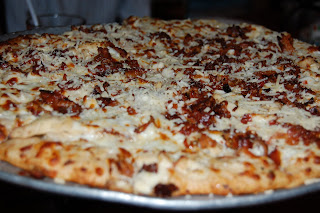 How good does this chicken pizza look? I was real jealous of this pie.
You know what doesn’t frustrate me? Teen movies. Or, as I fondly call them, teeny bopper movies. And we wouldn’t have the pleasure of gems such as Clueless, Can’t Hardly Wait or 10 Things I Hate About You (or Napoleon Dynamite, Juno or Nick & Norah’s Infinite Playlist) without the canon of one Mr. John Hughes.

Hughes died on Thursday, and yesterday our local radio station played a collection of songs from his movies. I only heard a few while I was on the way home from the pizza party that wasn’t, but it was fun to remember songs like “Don’t You Forget About Me” and the song I refer to as, “Bom, Bom, Chick, Chicka Chick Pow.” 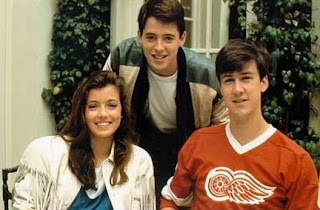 Out of all Hughes’ movies, Ferris Bueller’s Day Off is my favorite, with Breakfast Club coming in a close second. The Brat Pack gave us the spontaneous and yet cleverly choreographed group dance. And Ferris gave us so many quotable quotes:

What are your favorite John Hughes movies?