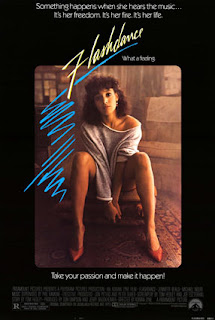 What a feeling! That’s what I should have been saying after finally watching Flashdance, one of the most famous dance movies of all, right?

For all my professed love of dance movies great and . . . not so great, I haven’t actually seen some of the earlier films in this oft-neglected (and mocked) genre.

Of course, given my lack of classic movie understanding and, Goonies fans some would say, appreciation, this may not be so surprising.

Either way, I finally got around to watching Jennifer Beals in the 1983 movie about a young girl trying to make it in the city and in the dance world. In other words, pretty young thing welds by day and dances, ahem, exotically by night.

So what did I think? Well, as it turns out, my response wasn’t much different (although not quite as harsh) as the critics of the day. The reviews were, as they say on Metacritic.com, generally unfavorable. In short, the plot is ridiculous and hole-y (not to be confused with holy, which it is most definitely not), the actors are fine but don’t get much to work with, and the dance scenes are comparable to MTV videos, circa 1983.

And there’s the fact that Jennifer Beals had more than one dance double working for her. That fact kinda bummed me out.

But, the plot is really no sillier than that of today’s movies. And the soundtrack did include “Gloria,” “What a Feeling,” and “Maniac,” so it has that going for it.

All in all? I didn’t mind it. And now I can say that I’ve seen it. But if given the choice, I’m still going to pick Dirty Dancing (or, okay, Step Up or Save the Last Dance) any day.

Have you seen Flashdance?