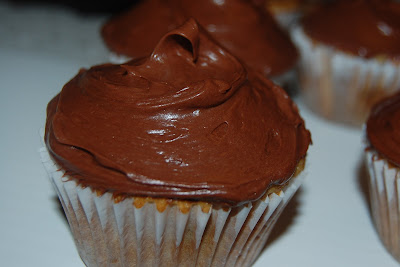 For Annalyn’s monkey-themed birthday party on Saturday, I decided that ordering a cake would be just too easy. I mean, why have someone else bake a cake when you can bake 48 individual cakes yourself?

Isn’t that my motto?

Seriously, after looking at our grocery store’s idea of a monkey cake, I decided that making one myself might be better. I know what you’re thinking: that must have been one ugly monkey cake!

After consulting Mr. Google, I found – among many complicated looking monkey face cakes – a Betty Crocker recipe for banana chocolate chip cupcakes. Get it? Bananas? Monkeys?

The only question that remained was how to make them party-cute. You know what I mean . . . plain cupcakes won’t cut it for my baby girl’s second birthday party!

With that thought in mind, I made the mistake of searching Etsy for ideas. Why do I do that to myself? Why?

Please stop making so many cute things that I cannot afford to buy. Thank you.

After deciding that I just could not justify spending the money being – rightfully, I am sure – charged for the cutest little cupcake toppers I’ve ever seen, I looked again at my cupcake recipe. That’s when I noticed it: their cupcakes had miniature bananas on top! Sooo cute! And so easy, right?

According to Betty Crocker, it sure is. The recipe says, and I quote, “Special Touch: Garnish cupcakes with banana-shaped candies. Look for them in the candy aisle of the supermarket.”

Oh, I did, Betty. And I found nada. Zilch. Nuttin’. Apparently banana-shaped candies are a mythical thing like the unicorn and self-tanner that doesn’t streak.

Don’t tell me about Runts. I know about Runts. I like Runts – especially the strawberry pieces. But it seems ol’ Willy Wonka and the Runts have fallen on hard times, because they aren’t selling in these parts. I looked at our grocery store, two Walmarts and a Target for these stupid candies. I even – at the very last minute – called the local candy store in the nearby, almost completely dead mall.

So, it was back to the cupcake toppers. Which I made myself. And turned out pretty cute – without even taking a million hours to make.

But the real masterpiece was the cupcakes themselves. Mark wasn’t a fan, but I thought they were delicious! And after frosting four dozen of them, I got pretty good at making the top look all swirly and pretty. 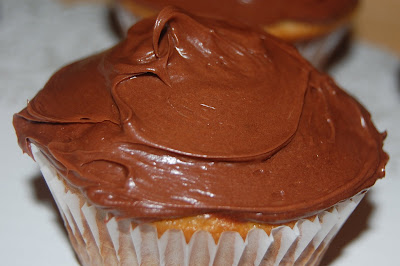 Four dozen is a LOT of cupcakes. Not to bake. Although I did have to actually break out my mixer and measuring cups and everything. But to frost? It’s kind of a lot. 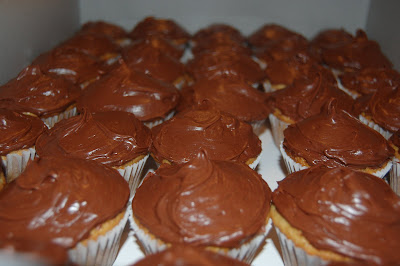 I think it was worth it, though. Things didn’t exactly go according to plan with Annalyn’s party. The weather didn’t cooperate, so the park shelter we reserved (and, ahem, paid for) didn’t really work out for our get-together. An hour before the party was scheduled to start, we decided it was just too darned cold and moved it to the house.

We moved it to the house, where I decided I did not need the green streamers to look like vines (Get it? Vines? Jungle? Monkey?). And I told myself that by cramming 30 people into our tiny house, the unswept floors would not be visible, much less noticeable.

So the party plans didn’t all work out quite right. But we did have a great time. And people seemed to like my cupcakes . . . especially the birthday girl! 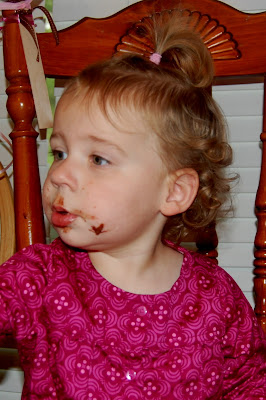