Heading for the highway…looking for my gas tank?

We bought my car, an Oldsmobile Alero, six years ago. It has been clear to us that it’s not the best car ever made in these 50 states for about five years. Mark has hated it for approximately five years. We paid it off just over one year ago.

Despite the rattling and whirring that occasionally popped up and the windshield wipers that only worked when they felt like it and the signal indicator that made its ticking noise even when the blasted blinker wasn’t on, it was a decent car.

And by “decent,” I mean that it got me from Point A to Point B. Every single time.

Until Saturday, that is. When a piece of metal lay (lie? laid? I don’t know.) in wait on the highway, jumping up to attack our gas tank at the most inopportune time.

Or opportune, depending on how you look at it. Because, after what seems like weeks but has only been a few days of dealing with insurance agents, rental car guys, insurance adjusters, used car salesmen and – worst of all – cranky spouses, Mark and I are now the proud owners of a new car.

The very car that we had looked at a month ago but decided we couldn’t afford. That’s our new car. Well, a new used car. A new-to-us car. A crossover, or as others might call it, an SUV-wannabe. Or, as my dad called it, a station wagon. No matter. It’s shiny and it’s big and it’s ours.

And I think it’s going to get better gas mileage than my sad, old Olds.

Here it is. Except, not. Because this isn’t the exact car we bought. I mean, it is. But ours doesn’t live in the mountains. It lives in the middle of the country. In a suburb. With all the other SUVs and crossovers. 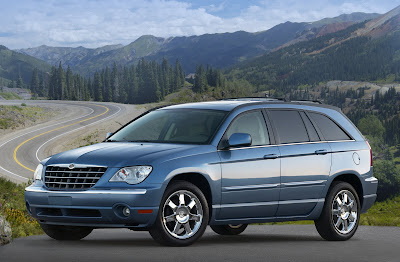 I’m just getting to know it, but so far, I love my new (used) car. I’m thankful that, despite my hopes and dreams for my old car lasting just one more year, God provided for us and moved up our car-buying schedule.

I will try to be just as thankful when the first payment is due in December.

What are you loving today? For more things to love, visit The Diaper Diaries.