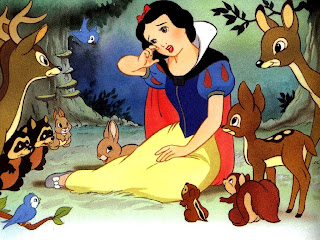 I owe Snow White an apology.

See, the last time I watched this movie, all I could think about was how annoying I found that cartoon girl’s high-pitched, mousy voice. So when One2One Network offered me the chance to review the Snow White and the Seven Dwarfs Diamond Edition (yes, for free), I’m not sure why I signed up.

No, that’s not true. I signed up because I thought, “This sure isn’t my favorite Disney movie, but maybe Annalyn will like it.”

And I’m happy to tell you that she did. After watching the Elmo video we checked out of the library about 10 times in four days, I couldn’t take it anymore. And since we were stuck at home with the croup, both of us feeling a little bit miserable, I had to do something. 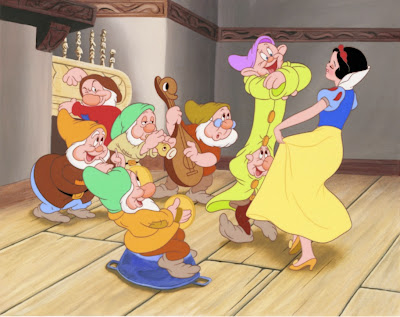 So Snow White it was. And while Annalyn didn’t sit and stare at the television for an hour and a half, she did like the movie. Or, in her words (when I paused it), “Movie! Watch it! Movie! Watch it!”

And, okay, I enjoyed it, too. Those dwarfs (dwarves? I’m not sure…) are actually funny, and it’s interesting to look at the 1937 animation, compared to what we see today. And while I hadn’t forgotten “Heigh Ho, Heigh Ho, It’s Off to Work We Go,” I had forgotten about “Someday My Prince Will Come” and “Whistle While You Work.”

Don’t think I changed my mind about Snow White’s puny voice. But the songs themselves? Well, just maybe I liked them after all.

But my favorite part by far was hearing Annalyn say (without her “r” as usual), “Pincess sad. Sad pincess.” Awww! So cute! (And yes, I do realize I will be sick and tired of pincesses before long. But for now – super cute.) 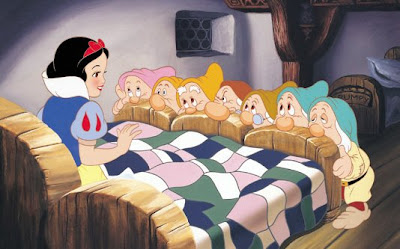 Now here’s where my review gets tricky. I’m supposed to tell you how awesome the Blu-ray disc is . . . but as you know . . . I’m a little behind in the entertainment technology department. So just in case you, too, are unaware of the benefits of Blu-ray, here they are:

In sum, I believe the Blu-ray is better than my 20-year-old VCR.

Seriously, it turns out I was wrong about Snow White. Sorry, Snow. I guess the American Film Institute wasn’t so crazy when they put you on their list of the 100 greatest American films of all time.

If you’d like more information about the Snow White Diamond Edition, visit the official website. You can also watch a special Blu-ray trailer here.