The library brings sunny days and sweeps the clouds away 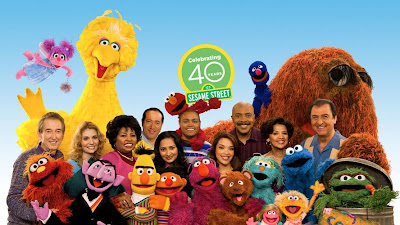 Can I just tell you that I am unable to count to 12 – in English or French, not that the francais comes up often, except maybe it does – without doing it Sesame Street style? Anyone else?

I know, I know. Sesame Street had its big birthday party two weeks ago. Google and the rest of the world shouted their congratulations and wished the kids show well, and it’s all over and done with.

Being late to the party is fitting, though, because our family has just recently gotten hooked on the friendly neighborhood. Of course, Mark and I are long-time fans, first-time callers of all kinds of Muppets. (Although, to be fair, more me than Mark.) But Annalyn is a newcomer to the Street of Sesame.

More specifically, it’s only been in the past couple of months that we have seen the start of a beautiful relationship between Annalyn and – I’m sure you can guess – Elmo. Sometimes we even pray for Elmo before bed. That’s how much “we” love him.

Actually, I don’t hate Elmo yet. He might have that crazy voice and ridiculous grammar, but that happy-go-lucky guy makes my daughter so happy that I just can’t complain.

The reason she’s just recently discovered Sesame Street is that for most of her life, she took a morning nap. And it coincided, unfortunately, with the daily airing of the show on PBS.

[That didn’t stop me from saying, every time I saw that our friends Amy and Jeremy did this for their kids, “I should record episodes so Annalyn can watch them any time she wants!” Not that I did it. But I totally thought about it.]

Since live TV isn’t working out for us and I couldn’t get it together enough to set the VCR, I finally had a better idea. We get our Elmo and Sesame Street fix from the library.

So far, the biggest hits have been Elmo’s Christmas Countdown (with a Ben Stiller Muppet – brilliant!) and Elmo & the Bookaneers with Tina Fey as a pirate. And yesterday we picked up Sesame Street: Being Green with Paul Rudd, also forever known as Josh from Clueless. Next on the reserve list: straight-up Muppets.

To sum it all up: Sesame Street has just celebrated their 40th anniversary, we love Elmo at our house, and checking out Elmo videos from the library works for me.