Monday Music: It Is Well by Kutless 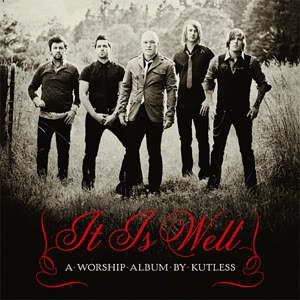 The first Monday of November, and what are two of our local radio stations playing? You guessed it: Christmas music.

I love the holidays. And I love festive music. But this starting earlier and earlier every year thing? Drives me up the wall.

Because now, even though I’ve finally gotten the presets figured out in my new car, I have even fewer stations to choose from. (My personal policy is to start listening to Christmas music not a day earlier than Thanksgiving. Because, really.)

Although, I’m not sure why I’m worried about it at all, considering the only way to keep Miss Annalyn from getting fussy in the car is by playing kids’ CDs. Constantly. Stopping to repeat on her favorite songs. Who needs a dozen local stations, when you’re just going to be playing “MY MOOZICK!” every afternoon anyway?

The mornings are mine, though. Mine to play whatever I want. And while sometimes that means silly chatter from the morning shows or peppy pop music to wake up my sleepy brain, more often than not it means one of the two contemporary Christian stations we have. For me, listening to uplifting – or, as they say, positive and encouraging – music gets me in a better mindset for heading into the office and facing my day.

I’ve tried to tell Mark he should do the same. Especially when he’s grumpy about this policy or that at work. Yes, he appreciates my helpful suggestions very much, thank you for asking.

Actually, he doesn’t. Because he doesn’t like a lot of contemporary Christian music. (Gasp!) He doesn’t have quite the same appreciation of overplayed, fluffy pop music that I do, though.

And that’s why – here’s the point, if you were looking for it – I’m excited about the latest CD from Kutless, It Is Well.

This CD came in the mail a couple weeks ago, and I have to admit: I was nervous to listen to it. See, I don’t own a lot of Christian CDs. Honestly, I am usually content to listen to whatever is playing on the radio – overplayed or over-poppy as it may be. And while I’d heard of Kutless, I wasn’t sure I knew specifically which songs are theirs.

I’m happy to tell you: This CD is great! And as soon as Mark gets home tonight, I’m putting it in his truck. Because it’s exactly the sound he likes – think Creed or Three Doors Down, maybe – but with better lyrics. (I wanted to say “a positive message,” but that sounds a little too afterschool special, I think.)

The band has taken several different types of worship songs – some old, some recent – and given each of them a Kutless spin. I love the way the CD starts off, with a high church choir singing, “It Is Well” and then the sound merging into the Kutless version. It’s hard to describe, but to me, it was a great way to introduce the album and announce, “Hey, we’re taking our favorite worship songs and making them ours.”

I’ve already put this CD into my iTunes, and I can tell you it’s going to be played heavily in our house (truck, office, etc.). If you like your rock to be encouraging – or if you like your Christian music to have some edge – check out It Is Well by Kutless.

And here’s a little bit about the album, from the band itself:

We began this worship project, It Is Well, by asking one question, “Can we do something unique?” There are many worship records; however, we were driven by the challenge to do something different, something Kutless. Although we’ve done a worship-oriented album (“Strong Tower”), we are in a different place right now and wanted this project to reflect our hearts.

From February through May 2009 we poured over hundreds of songs. We looked for songs that had a special meaning to us, songs that were traditional, songs that were modern, and songs we could make our own. As the list of songs started to form, we began arranging the songs to fit our style, after all, we are a rock band. This was a challenge in terms of how to take a hymn written in the late 1800s and make it sound like a Kutless song.

The recording process was unique for us for many reasons . . . We had one of those incredible experiences that happen to Christ-followers. We started with a goal, but, through the process, God took that goal and turned it back around to Himself. The quest for a special album became a unique time for us to go deeper in worship. The goal of composing original songs became a time for us to grow in our love and appreciation of each other. The epiphany for us was that the purpose of a worship record was to reflect who God is – His peace, freedom, power and ability to help us grow in relationship with Him and others. In the end, this “unique” experience happened to us in the making of It Is Well.

So, tell me: how do you like your Christian music? Or do you like it at all? I want to hear all your opinions. (Even if you happen to be my brother and want to tell us how choir music rocks.)

I received this CD from Overture Media but was given no other compensation for this review. And as always, this is my honest opinion. The Amazon links are affiliate links.