Happy Christmas: I wrapped it up and sent it. 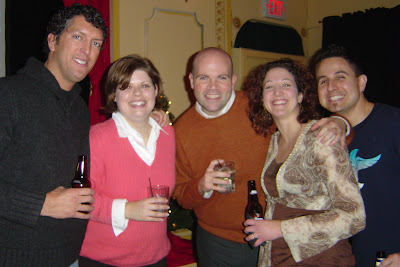 I used to work at an ad agency. It was very glamorous. We promoted dog food.

Okay, so it wasn’t that glamorous. But we did have a ping pong table. And shiny concrete floors. And a movie theater downstairs with a lobby full of couches and the lingering aroma of buttery popcorn.

I also learned a whole heck of a lot while I worked there. And had the privilege of working with some amazingly talented folks. But you know what I remember most?

While you shouldn’t believe everything you hear/read/see about advertising being a glamorous career, the stories about the cavorting and carousing aren’t quite as exaggerated. At least in my experience.

I’m not saying I remember fondly the time my co-worker puked in a champagne bucket as we celebrated finishing a long campaign. Or that I cherish the memory of standing beside a co-worker’s desk to ensure he stayed on task and met our deadline instead of falling back into his drunken rant about holiday movies. And I certainly don’t long for happy hours that go well into the night, leaving a sober me to face down a drunk VP who did not care for the fact that I did not care for his sacrilegious jokes.

But the part that came before that mess? The hanging out with the people on my team, the getting to know them on a personal level, the having fun with those I spent most of my time with? That was a good time.

I don’t really hang out with my current co-workers. Really, I haven’t spent much out-of-the-office time with any co-workers since the ad agency. I meet my agency friends for lunch now and then, and I catch up with my friends and former co-workers at the non-profit whenever I can. But these days, work stays at work.

And that’s okay. But this time of year, when Bing Crosby and Harry Connick, Jr. are blaring from every speaker in the world, I can’t help but reminisce a bit . . .

[Insert blurry vision and twinkling music here, as we flash back to 2005.]

My favorite ad agency party memory – and seriously, there are more than a few – is my friend Brent’s rendition of Wham’s Last Christmas, courtesy of a karaoke machine and more than a few bottles of something. Brent sang his heart out to that silly song, and every time I hear it, I can’t help cracking up.

Even now, four years later. Even if I’m at Target. Doesn’t matter. I still laugh. Every single time.

It turns out my friend Brent isn’t the only big fan of Wham’s biggest hit. (Really? You thought it would be Careless Whisper or Wake Me Up Before You Go Go?)

According to Pop Candy, USA Today’s pop culture blog, 2009 marks the 25th anniversary of the song. I don’t know that this calls for any real celebration, but there is a site dedicated to the almost 400 covers of Last Christmas. You really should go there and, at the least, check out the header image. In the words of Napoleon, it’s pretty sweet.

I usually prefer the original myself (No offense, Taylor.), but the GLEE version might just be my new favorite. Even better? If you buy it on iTunes, a portion of the proceeds will benefit the Grammy Foundation’s music education programs.

As for me, I just don’t know that I’ll ever hear, “Once bitten and twice shy, I keep my distance but you still catch my eye. Tell me, baby, do you recognize me? Well, it’s been a year; it doesn’t surprise me.” without snickering and thinking back to those crazy days of ad agency life yore.

Have you ever mixed karaoke and Christmas carols? Do you hang out with co-workers outside the office? What would happen if you added Christmas karaoke to your office holiday party?