Saturday Review: The Blind Side 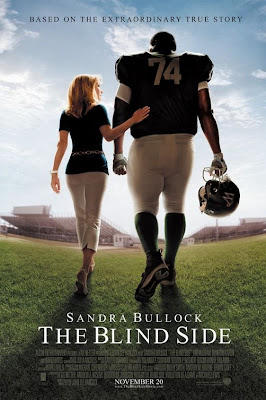 On Thanksgiving night, Mark’s brother was kind enough to stay with Annalyn so Mark and I could go to a movie. While the impromptu date didn’t relieve us of some pretty severe grumpiness, we did get to see a really great movie.

[Seriously, we are I have been so grumpy and out of sorts the past couple of weeks. I don’t know what the deal is, but I’m ready for it to be over. I’m hoping a little holiday festiveness as we put up the decorations tonight does the trick. Stay tuned.]

Back to the movie. We really want to see Sherlock Holmes, but of course it doesn’t come out until Christmas Day. So we were left with Couples Retreat or The Blind Side. And I believe we chose wisely.

The Blind Side depicts the story of Michael Oher, a homeless African-American youngster from a broken home, taken in by the Touhys, a well-to-do white family who help him fulfill his potential. At the same time, Oher’s presence in the Touhys’ lives leads them to some insightful self-discoveries of their own. As a football player and student, Oher works hard and, with the help of his coaches and adopted family, becomes an All-American offensive left tackle.

When we got home from the movie, I did what I often do: I looked up reviews online. I like to see if my opinion matches up with the pros’, okay? In this case, it really didn’t.

While Variety called the movie an “uplifting and entertaining feel-good, fact-based sports drama,” other reviews labeled it “middle-class pandering at its most shameless” and “a facile, feel-good fable that substitutes cliché for reality at nearly every turn.”

I guess I can see what they’re talking about. But I thought the movie was great. And so did the sold-out theater full of people who watched it with us. Throughout the movie, people spontaneously clapped several times, we all laughed hard, and most of us couldn’t help but wipe away a few tears.

The Blind Side was funny and touching, and it made at least one viewer (ahem, me) really think. It had some sports stuff for the guys, and it was clean enough for most audiences. And Sandra Bullock…or her character…or both were amazing. Overall, it was just a darned good movie.

I give this one two thumbs up. No matter what those critics say.