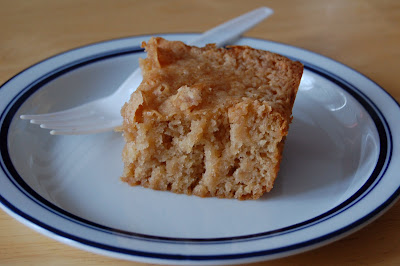 Mark’s mom was an amazing cook. And for every special occasion, she made a special apple cake for her youngest son (her baby, if you will).

I tried to make it once. I had her recipe, and I followed it to a T. I thought it turned out pretty well, but Mark made the unfortunate choice to say, “It’s pretty good, but it doesn’t taste like Mom’s.”

Or something like that. This was several years ago, but you get the point, I’m sure.

(I don’t hold it against him. He’s also said that I make better lasagna than she ever did, and that was even before I tried out the Pioneer Woman’s recipe.)

A few years ago, I went to my first Tastefully Simple party. It was on that night that I discovered the solution to all our apple cake problems.

Nana’s Apple Cake Mix literally takes two minutes to fix. And it tastes WAY better than I remember a certain mother-in-law’s homemade from scratch cake! (Okay, that might not be true. But since I’ve given up baking for REAL, it’s what I’m telling myself.)

I’d planned to make the cake for Mark’s birthday, but that didn’t happen. I did, however, manage to throw it together for Valentine’s Day. Annnnnnd it was delicious. (Annnnnd it’s already gone!)

Have you ever tried to make a family recipe – and failed?