Things I need to say on a Thursday.

That’s not a carnival or meme or anything. I just need to say some things today, and “things” happens to sound great with “Thursday.” It’s just a coincidence. I didn’t do it on purpose.

Also, I should clarify. “Need to say” sounds real serious. And it’s not. Honest. I just can’t pull my thoughts together for a coherent story or rant or walk down memory lane. I’ve got too many THINGS running around this old brain.

I say “old” because I found a gray hair yesterday. It was so beautiful, shimmering in the bathroom light. (NO, IT WAS NOT BEAUTIFUL.) It’s really a bummer, and for two reasons. One, because I’ve long prided myself on being the only person my age who hasn’t started finding gray hairs yet.

And two, because I’ve always assumed that my first gray hairs would be in the midst of my blonde streak. I may have even fancied myself having one of those classy gray streaks like Stacy London. Yesterday’s silver strand? Of course not. It was smack dab in the middle of my plain brown hair.

Happy National Grammar Day! What? You didn’t know today was a holiday? Didn’t you get the day off work? Huh. Well, me, either. But I did get the opportunity to guest post about my sick healthy love of grammar at Mommin’ It Up. I hope you’ll visit me over there! (After you finish here. Come on. Priorities, people!)

On another note, I would like to register a formal complaint. Against my laundry. It. Just. Won’t. Stop.

Mark wears half a load of laundry every night at work, because it’s so darned cold, so every single time I think I’ve gotten a good handle on the laundry and I just might see the bottom of my hamper, he comes home and pulls off seven articles of clothing. It’s annoying.

I’m listening to iTunes right now. And I just went from a song called, literally, 1 John 4:7 to Mel McDaniel’s Baby’s Got Her Blue Jeans On. There’s something wrong about that and yet, so right. 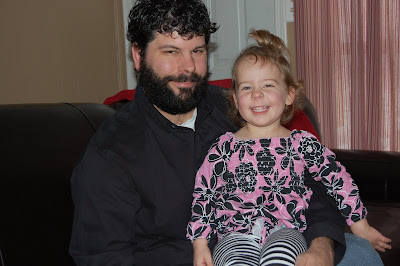 Speaking of a baby (I don’t know. I was trying for a segue here, okay?), Annalyn has been doing great in daycare this week. I was the only one who got teary-eyed when we dropped her off for her first day, and I don’t think she’s landed herself in time-out once all week.

At school, that is. At home, it’s a different story. Poor kiddo has only napped one out of three days so far, and that’s not normal for her. And she’s missing her daddy something fierce. Because Mark is expecting a job transfer – which will mean a night shift, instead of an evening shift – we’ve put her in all-day care. But because he’s leaving for work in the afternoon, that means Mark isn’t seeing her at all.

And since they’ve spent the bulk of their days together for the past two years, that’s a pretty drastic change. The first thing Annalyn said to me when I picked her up yesterday (after “Hi, Mommy!” and the requisite hug, of course) was, “I want to see my daddy.”

Awww! Then when we called Mark in the car, she said, “Hi, Daddy. I’m sad.” Of course, she perked up pretty quickly when she told him about throwing snowballs and taking her shoes off and eating chicken nuggets.

But still. We’ll all three be glad when he can start his new shift and spend more time with both of us!

iTunes update: I’m now listening to Winter Wonderland by The Andrews Sisters. I think we’ve had about enough of the wonder of winter. Can I get a second?

For the past several weeks, I’ve been dipping my company’s toes into the world of social media. We’ve started Facebook, Twitter, LinkedIn, YouTube and Flickr accounts, and I’ve been updating them. And last week, we officially launched a company blog. It’s a lot of fun, although I will say that doing social networking for a company is way different than social networking for myself!

Losing weight would be a lot easier if I ate less and exercised more. And that’s all I have on that topic.

My friend Hillary is starting a carnival called Friday Favorites tomorrow. I’m hoping some flash of brilliance strikes between now and then, so I can join her. With a bang. Or flying colors. Or something. You should do it, too.

I think that’s all. If you endured this brain dump, I thank you. And apologize. Feel free to dump your own brain into the comment section.