I knew the moment she ripped out her feeding tube.

Have I mentioned lately that Annalyn was born seven weeks early? No? Because she was. And I kind of talk about it a lot.

You know why? Because it was a miracle.

And not just the fact that she was healthy, but it was also amazing that she was able to come home so quickly.

Every time I hear about a family living in the NICU with their premature baby for weeks, I’m thankful all over again that Annalyn only had to stay in the hospital for nine days longer than I did.

But part of the strong will that kept her warm and strong and breathing well when she was a teeny tiny baby? Um, yeah. It’s the same darned will that’s driving me crazy two and a half years later!

I am not exaggerating. When Annalyn was less than two weeks old – still weighing barely more than four pounds – she ripped out her own feeding tube.

The NICU nurse said that they wouldn’t put it back in unless she needed it; she said they’d try to give her a bottle. But, she warned me, babies never took the bottle that early. They had to be at least 36 weeks (or in Annalyn’s case, three weeks); something in their little tiny brains just clicked at that point.

Every time, she said. That’s how they all were.

Except my tiny baby. Annalyn started eating from a bottle and never looked back.

That strong will was a good thing back then. A real good thing. And, as a friend recently reminded me, it will be a great thing when she’s 16 and dating.

A few weeks ago, I had to take her to choir practice with me. She was great. Except for when she said, “No, Mommy! You no hush me! I no hush!”

I know, I know. Some of it’s typical two-year-old stuff. (And don’t even tell me about how the threes are more terrible than the twos. I may have heard it already. Just a time or twenty.)

But you have to admit. The thought of that tiny baby who pulled her feeding tube out – as a teenager? Kind of scary, right?

Over the next several weeks, the March of Dimes will be holding a walk in a city near you. (Or in your city, you know, if you live in a city.) March for Babies gives hope to the 500,000+ babies born early every year. The money raised by these walks supports programs that help mothers have healthy, full-term pregnancies.

As I’ve mentioned before, this is a cause that’s close to my heart. So when I heard (because they told me) that Famous Footwear is supporting the March of Dimes with a special shoe, I was impressed. 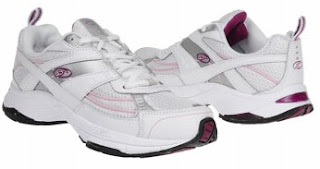 For a, ahem, related discount and a giveaway, visit my other site.

Have you ever walked in a charity walk? What’s your favorite cause to support?

P.S. I love the March of Dimes and this shoe campaign. Therefore, I’m linking up to Things I Love Thursday and Friday Favorites.