A while back, I noticed that two of my favorite shows used the same actress as a guest star. When I looked her up, I thought she was the girl from House who ended up dying. (Oh, that does not narrow it down. She was the girl who dated House’s friend and then died somehow. I don’t really know more than that. I don’t actually watch the show.)

But I found that Diane Neal, who guest starred in both NCIS and White Collar, is not Anne Dudek, who starred (and died) on House. They both have abrasive personas and manly voices, and turns out they were both born in 1975. But they’re not the same person.

As I was looking for photos that showed how much they looked alike (which turned out to be more difficult than I thought, so perhaps they aren’t actually twins separated at birth), I started thinking that Dudek looks like that girl from 24.

No, I don’t know which girl. I have never watched that show in my life. But I just saw an article last week with her picture, saying that the “star from 24” was going to be on Royal Pains this summer. And her name is Mary Lynn Rajskub. (Yikes. How do you pronounce that?)

THEN, as I was looking for pictures of Rajskub to match up with pictures of Dudek, I started thinking that maybe she (Rajskub) looks like Justine Bateman. You know, from Family Ties? (And how has not aged well, if Google Images is to be believed.)

And then I wondered, as I simultaneously looked for pictures of Bateman, if Rajskub is on Accidentally on Purpose, a stupid, stupid sitcom that I shouldn’t like, much less admit that I like, but there it is, I like.

Nope. She’s not. That girl is named Lennon Parham. And my goodness, I never would have guessed that one!

So they’re all different women. But somehow, in my crazy, mixed up, too-much-TV-watching mind, they are all mushed into one. 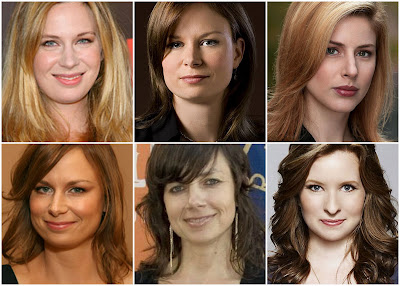 I was going to talk about all the lookalikes I’ve noticed lately, but after that, I’m done!

Except for this: I will tell you that when I start typing the name of any actress into Google Images, it automatically brings up their name plus the word, “hot.” I find that annoying. (Not Betty White. I tried her, just out of curiosity. It did bring up “Betty White gun,” though.)

Noticed any lookalikes lately? And how was your weekend?