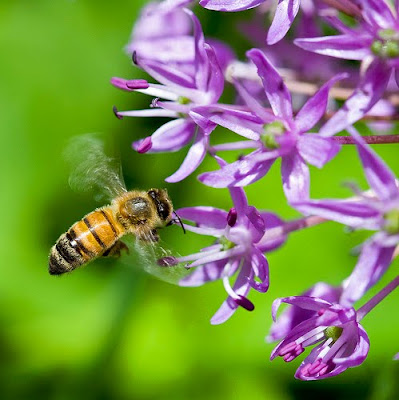 A couple weeks ago, I pulled into the parking lot at Annalyn’s daycare and turned off the ignition. I pulled out my checkbook and leaned over the steering wheel with pen in hand. As I finished writing, I glanced up and saw dozens – no, hundreds! – of buds or leaves whirling around my car.

Then I took a second look. They weren’t leaves. They were bees.

I have never in my life seen more bees. Except in that movie where the kid dies from getting caught in a swarm of bees. You know, with the Home Alone kid. And he dies? From bees?

[Side note that might explain me moving from calm to the edge of hysteria in about 17 seconds: My grandma is deathly allergic to bees. My dad has had a major reaction to wasps. And I had a crazy, scary reaction to a poisonous (or highly allergy-inducing) spider when I was a kid. So bugs freak me out.]

Whipping my head back and forth, I searched for signs that anyone else was alarmed. I saw a family sitting in their cars, casually pointing to the fit-for-a-horror-film swarm. I saw a mom, putting her child into their car, seemingly unaware of the dangerous bugs flying around, landing on her back and zooming into her car. With her child.

It seemed like I was the only one who cared!

Well, I wasn’t about to open my door. (And oh my goodness, what if I’d had my window open when I pulled in? What if I hadn’t realized they weren’t leaves??)

I put my car in reverse, and while I wanted to completely flee the scene, I exercised some restraint and just moved my car to the other side of the parking lot. The safe side. The bee-free side.

Still, I had to use my wipers (and then the cleaning fluid) to get rid of the stubborn stinging devils. Finally, I felt safe to step out of my car.

Quickly, I walked inside, vigilant eyes darting around the whole time. I walked up to the reception desk and said, “Maybe this happens all the time {WHAT?}, but there was just a HUGE swarm of bees out in the parking lot.”

I expected them to be at least as alarmed as I was. But they weren’t. “Oh, yeah. We found a huge hive over there. We called the Orkin man, but they have to send a bee specialist. Apparently they have to be taken out alive.”

Actually, that is what I said, verbatim. I may have seemed crazy at that point, but seriously? The hive is just a few yards from the playground. Where the kids – including MINE – play every single day!

I get it. Bees are endangered. Somehow, they’re important to our ecosystem or some blah, blah, blah. All I know – and care about – is that they sting, they are dangerous and about 10 million of them were taking over my daughter’s daycare.

It was the scariest thing I have seen in real life . . . since maybe ever.

I don’t know if they’ve removed the hive yet. I asked a couple times later in the week, and I kept getting much-too-casual responses. I can’t imagine that, in a school where nuts are not even allowed on the premises, bees are okay. It’s so strange to me.

Even stranger is the fact that just a few weeks before this happened, my co-worker BOUGHT bees. To raise. In her backyard. On purpose.

And the other day, she sent us pictures of her bees, swarming all over their yellow hive, plotting the destruction of mankind, I’m sure. She was like a proud mama, all over her BEES! That she bought ON PURPOSE!

When I told my parents about this – the swarming bees at daycare, not my co-worker’s weird new hobby – they were properly alarmed. My mom even said, “Yeah, we never did figure out what stung you that time you had such a terrible reaction.”

I reminded her that, yes, we did know what got me – and it was a spider. As a matter of fact, I’ve never been stung by anything, I told her. Who knows how bad I’m allergic, considering my other allergies and previous reactions to other bug-type creatures.

With that in mind, I made sure to put bug spray on our grocery list – both some for our yard (which resembles a swamp, much to our chagrin and the mosquitoes’ delight) and for Annalyn. Last year, every bug bite she got swelled up like a balloon – just like her mother.

Of course, when we went to Walmart to buy groceries, we walked about 14 miles around the supercenter without spotting a single bottle of child-safe bug spray. So I circled it on my list to find at another store.

When we finally got home from buying groceries, it was later than we’d planned. Mark said he’d unload the bags so I could hustle Annalyn through dinner and bath. So I got her out of her carseat and grabbed my purse, the grocery list and a few bags from the trunk.

Yeah. I got stung by a wasp.

The good news? I didn’t die. My throat didn’t close up, and though my finger (my poor little pinky finger) is red and swollen, it’s really not much chubbier than it started. (Which, no, isn’t saying much, other than I didn’t have a terrible reaction.)

I’ve been saying all weekend that celebrities better watch out, because since Gary Coleman and Dennis Hopper died, you know a third death is on its way.

Have you ever been stung by a bee or wasp? Do you know anyone who’s allergic? Did you like the movie, My Girl

, or did you think it was as depressing as I did?