Who cares what it’s called as long as it tastes good? 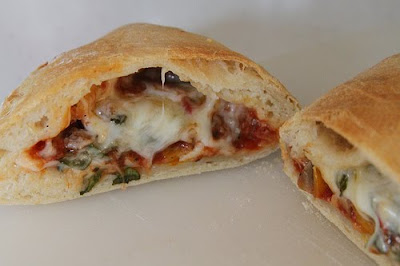 Image by Joefoodie. I think his ronza stromboli has spinach in it.

In the town where I went to college, a pizza place on the downtown square served these things called ronzas. I’d never heard of a ronza before then . . . and I haven’t heard of one since then.

Apparently, in the outside world, they’re called calzones. Or stromboli. Or runzas. But a ronza? No. Nobody’s ever heard of that.

When I tried to find evidence of this long-remembered snack from my college days, I came up pretty empty. However, I did find a review of the restaurant (Pagliai’s, and that’s pronounced “polly-eyes,” just so you know.) on Yelp.com.

I had to laugh when I read it and realized it was actually written by my friend, Tim! He said, among other things: “In my opinion, [pizza’s] not the reason to go to Pagliai’s – it’s the Ronza. That’s right. A capital R because it deserves it.”

And that’s why even now, a few years later, Mark and I still crave the pizza snack every once in a while.

Because I’m a nerd (Go ahead. Try and debate that.), I looked up the terms with my favorite research tool. And according to Wikipedia, stromboli is a type of turnover filled with various cheeses, Italian meats or vegetables. The dough is Italian bread dough, and it originated near Philadelphia.

Calzones, on the other hand, are turnovers that originate from Italy and are basically described as a pizza turned inside out. And a runza is completely different: a yeast dough bread pocket with a filling consisting of beef, pork, cabbage or sauerkraut (yuck!) and onions, baked in various shapes.

And then there’s the Hot Pocket, of course:

Anyway. While I don’t actually mind a Hot Pocket now and then, sometimes only an actual ronza will do. But since Pagliai’s is about a three-hour drive away, we’ve had to figure out how to make them ourselves.

Last week, I mentioned to Mark that I wanted to make one and said I’d probably do it the following night. But the next night, I forgot about that and said I was going to make tacos, and he said, “But…but…I thought you were going to make a ronza!”

Once I brought it up, he couldn’t wait to have one. So…he made it! And while I would have done things a little differently, it was still really good, so I thought I’d share the recipe.

Mix the barbecue sauce with the browned (and drained) hamburger and bacon. Unroll pizza dough on baking sheet sprayed with baking spray (or, as I say, on a cookie sheet sprayed with Pam). Spread meat mixture and then sprinkle cheese on top. Fold over dough and press edges closed.

Now, I would have sprayed the whole outside of the ronza (or brushed with olive oil, if I was real fayncee) and then seasoned with garlic and maybe a little basil.

But Mark just put a little extra cheese on the outside. To each his own, I suppose. (And believe me, it didn’t stop me from eating it!)

Cook according to pizza dough instructions. Slice and serve.

What do you call this type of food? And do you have any favorite foods from somewhere you lived before?

This post will be linked to Mouthwatering Monday, Tasty Tuesday, Tuesdays at the Table, Tempt My Tummy Tuesday, What’s Cooking Wednesday, Friday Food, Foodie Friday and Food on Fridays.