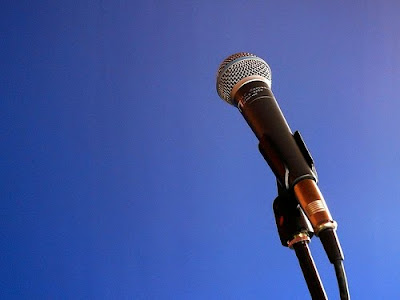 I wrote this as a guest post at Bec’s I Heart Blog a few weeks ago, and I thought I’d share it with you, too. (The image is by hiddedevries.)

I remember this one slumber party in high school. I’m not sure what the occasion was, but snacks and movies and giggling were surely involved. At one point in the evening, we were piled in my friend Angie’s room singing along with whatever song came on the radio.

And I grabbed a hairbrush and rocked out.

That might not seem significant to you, but to me, it was memorable. For that brief moment, I was free. I wasn’t embarrassed, I wasn’t self-conscious. I just sang.

From middle school on, I was in every chorus and choir our school had. I sang a few solos, some duets and even a sextet (which, as you can imagine, prompted many rude jokes from the male members of our choir).

Smitty and I loved to argue about who first said it, but regardless, we both believed it: There’s a song about everything. And that means that everything made me think of a song.

But ask me to sing the song that I so cleverly thought of? Um, no thanks!

I wanted to sing. I realized how silly it was. But singing on a stage, with lights and microphone and crowds down below, is one thing. Singing by myself, standing in front of someone, even my closest friends? That was way too intimidating.

College, marriage and my early career years helped me let go of a lot of my reservations. Or, more accurately, made me a little less uptight. But I still had this thing, this hang-up about singing.

Even though I sang in a huge choir, led worship at church and sang solos, too.
There was just something so awkward about impromptu singing, something embarrassing about potential sour notes and forgotten words.

As a matter of fact, a few years ago I was forced (FORCED!) into singing karaoke at a work retreat. I fought it, I protested it; but they made me do it. I thought I was going to die. {Although, for the record, my rendition of “Walks Like an Egyptian” was quite impressive.}

Something happened shortly after that incident, though. I had a baby. A baby who likes music. And so, I sing.

I sing her to sleep. I sing her awake. I sing to her in the bath, and I sing to her as I get her dressed. I sing about her toys and our family and our cats and her hair and her toes.

While before, everything made me think of songs that I couldn’t share with anyone, now I blurt out notes and melodies at the drop of a hat.

Sometimes I don’t even realize what I’m doing. Like this past weekend, when I tried to distract my cranky daughter in the car by naming all the things she could see outside her window.

After she decided that the sky was, in fact, blue not red, I could hear it in my head: Blue skies smilin’ at me. Nothin’ but blue skies do I see . . .

The next thing I heard was my husband chuckling. I asked him what was so funny, and he said, “That’s the last thing I ever thought I’d hear: you singing Willie Nelson.”

Little did he know, I wasn’t. I was singing Frank Sinatra!

But what was more interesting is that I was singing at all. Not in the shower. Not to the radio. Not within the comfort of a choir or lighted stage. Nope, I was just singing whatever came to mind – without thinking about it, without even realizing it.

I love singing. And now, it seems, I can actually do it whenever I want!

Do you like to sing? Are you embarrassed to sing in front of certain people, or do you let it all hang out no matter who’s around?

This post will be linked to Tuesdays Unwrapped at Chatting at the Sky.