When I was in second grade, we sang “That’s What Friends Are For” in our music program. To this day, I still know all the words – and remember to pronounce “for sure” the way our teacher drilled into us: “for shoe-er.”

Anyway. I’ve been a little out of sorts this week.

On Friday, Smitty and I had a, well, I don’t know what to call it. It wasn’t a fight or even a disagreement. But we had a thing. And while we’re not mad or anything, it left me feeling weird.

Then, on Saturday, I had dinner with friends of ours. Mark stayed home, because he had some flu or cold or something he didn’t want to pass on, so it was just the three of us and our kids. And for some reason, we didn’t have much to say to each other.

Normally, we talk each other’s ears off, trying to cram in all the latest from the weeks between visits. This time, though, it was awkward. And quiet.

And then there’s the fact that my friend Kevin really did go and move to stinking California. (Not that I actually think the Golden State smells bad. I’m just annoyed that it’s half a country away from here.)

Maybe all that is why I was so deeply touched when I read about 4tunate $4 Friends. [Okay, or maybe it’s because I’m a big ol’ sap. Whatev. I think it’s great.] A group of my favorite bloggy girls have circled around Jen, also known as Quatro Mama, whose family has been going through some seriously hard times. 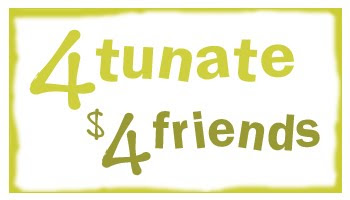 Jen is an amazing woman who is always giving to others. She recently raised more than $2,500 and gave away a laptop out of her own pocket to help support a March of Dimes campaign. I don’t know her personally, but it’s clear even to me that she is a sweet, funny, giving lady!

Recently, Jen’s family has had to deal with a lot of illness. Honestly, I can’t imagine taking care of quadruplets on a good day, much less on a less-good one.

Until midnight (tonight), Jen’s friends are collecting donations ($4 each. Get it? $4 Friends?) to fill her freezer, refrigerator and cupboards with food. ALL proceeds raised will go to that goal.

And now I want to hear from you. When’s the last time a friend did something nice, something unexpected for you? OR, if you can’t think of something (yikes!), what’s your favorite way to help out or show your friends you care during a hard time?