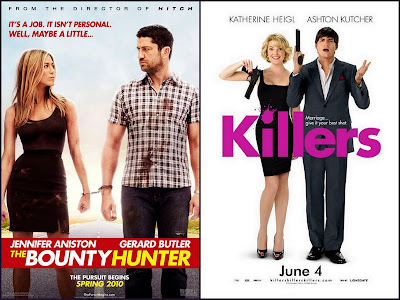 We’ve seen quite a few movies so far this summer. That’s not normal. I hadn’t stepped into a theater for about six months before we saw Date Night. But I’ve just been on a movie kick lately, and summer schedules make it a little bit easier to actually see them.

Note that I didn’t say I’ve seen quite a few good movies lately. Because while I have enjoyed myself immensely, I don’t expect to see these films winning any awards. They were both highly entertaining, but neither one was actually good.

: As I’ve mentioned before, Gerard Butler is Smitty’s movie star boyfriend. So for her birthday I took her to see him in this movie. We laughed a lot, and afterward debated the pros and cons of things such as Gerry’s accent, abs and hair. The premise of the movie is that Milo is a bounty hunter and he has to pick up his ex-wife, Nicole, and take her to the police station. Of course they’re chased by various bad guys throughout the movie. And course they’re still in love.

, and I found it interesting to compare those to this movie, since both are about a bounty hunter from New Jersey. When I realized the movie was in Jersey, I had to wonder: is that the only place that has bounty hunters?

And, my apologies to Smitty and all of Butler’s fans, I’m just not sure he’s aging well. Maybe it’s because the last two movies I’ve seen him in, he played a rude, schlubby guy. (Yes, that’s my technical term.) But I’m not sure about him.

As for Jennifer Aniston, I don’t know. I loved Friends, of course. And I don’t hate her. But while I think she’s okay, it seems like most of her movies kind of stink. Salon.com said something that makes sense: “[Aniston] doesn’t just sleepwalk her way through these half-baked roles, she actually works at them, and her gumption, at least, is admirable.”

Anyway, about the movie. Was it great? No. Was it a little bit hard to like either one of them at times (ala The Breakup

, another Jennifer Aniston movie)? Yes. But did we have fun watching it? Sure.

: I saw this movie compared to Mr. & Mrs. Smith

in several reviews. I can see the similarity. The husband character is a spy! His wife doesn’t know! Bad guys show up, and action and hilarity ensue!

Unfortunately, as most the critics noted, the leads of this movie have way less chemistry. In other words, don’t look for Ashton Kutcher and Katherine Heigl to be running off and adopting a bunch of kids anytime soon. (At least, together. They may, in fact, adopt kids with their respective significant others. I really can’t speak to that.)

But again, I really enjoyed this movie. Mark and I went to see it when Annalyn spent the night with my parents. I don’t know if it was the novelty of going to a movie or going somewhere in the middle of the week, period, but we had a great time.

One review said it perfectly: “Somehow Kutcher and Heigl and Tom Selleck and Catherine O’Hara (as her parents) are all fun to watch a fair amount of the time, without the movie they’re in being any good at all.”

Tom Selleck and his mustache are hilarious, and Catherine O’Hara is a riot, too. I’m pretty sure I’m not a fan of Katherine Heigl (Crazy Izzy on Grey’s pretty much ruined her for me.), but I can’t argue with Ashton Kutcher. Nope, I can’t.

Saturday Review side note: Critics panned both these movies, according to the handy summaries at Metacritic.com. [Bounty Hunter | Killers] I love that I can see in a glance what the general consensus is. But what I don’t love is the way Variety has recently decided to only offer a handful of articles for free each month. I find their reviews to be intelligent, fair and often accurate – and now I may or may not be able to read them. Boo. [I feel like I read somewhere that they were bought out by someone recently, but Google and Swagbucks failed me in my search for evidence. So…who knows.]

Have you seen these movies – or any other ones – this summer? Do you think Knight & Day will complete the season’s trifecta of entertaining but actually lousy romcoms?