Ten Burning Questions I Have for PBS/Sprout 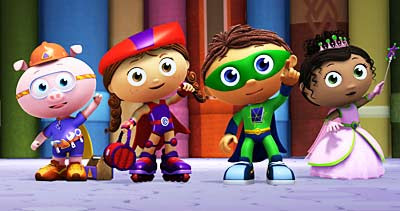 Today’s post is from Jessie at Vanderbilt Wife. An amazing writer and an even better mom, Jessie is one of my first and best blog friends. And her post is hilarious and spot on. (Trust me. I’m posting this while my kiddo watches a solid hour (or so…) of PBS!)

My kid watches PBS. Like, a lot. (Well, maybe not a lot compared to some kids? Or that’s just how I justify it?)

I have grown to love some of the shows … and really hate others. That’s when you find yourself with the remote saying, “Libbie, don’t YOU want to watch Super Why?” (And not Caillou. AGAIN.)

But I have some burning questions about these shows. I know it’s kid TV and all, but shouldn’t it still make sense?

1. WHY IS HIS NAME CAILLOU?? OK, I don’t think this show is on regular PBS, but it’s on Sprout ALL THE TIME. And my daughter would watch it incessantly if I let her. (She will even jokingly say, “Why do I watch Caillou all the time?” because my husband and I must say that.) BabyNames.com backs me up that Caillou is not a real name. Chill is a real name. Caillou is not.

2. And why is Caillou bald? He is 4. I know there are kids who don’t have hair for awhile, but at 4? Come on. His sister has hair, and she is significantly younger.

3. Does Wonder Red really serve a purpose on Super Why? I like her and all, don’t get me wrong. But she doesn’t even do her “job” in a lot of the episodes. She seems slightly superfluous.

4. Why does Wyatt’s family live in Storybook Village, anyway, when everyone else is from a fairy tale? Is he from some little-known Aesop fable? A rhyme they know in England?

5. Where did Buddy the Dinosaur come from, and why didn’t the Pteranodon family return him?

6. Isn’t it a little creepy that the Cat in the Hat says, “Your mother won’t mind at all if you do” in every episode? Before the kids ask the dimwitted mother? [This guy agrees with me.]

7. Why do they keep screwing up Sesame Street? My husband will claim it all went downhill when Elmo started overshadowing Grover. But watching the new episodes, which have the animated Flying Fairy School segments and the claymation Bern and Ernie, is somewhat painful. Bring back the Count and do away with Murray; and personally, I’d like to see more Snuffy. We tend to watch older episodes on Netflix or Sprout, because even ones from seven or eight years ago don’t have the newer, lame segments. They do have Elmo’s World, but we have to agree to compromise somewhere, don’t we?

8. I personally love Sid the Science Kid, but where is Sid hiding that giant microphone in his clothes? It freaks me out.

9. Doesn’t anyone ever wonder why the man in the yellow hat has a monkey in New York City? Or why a monkey is on a bus? At the museum? In a restaurant?

10. WHY ON EARTH HAVEN’T PARENTS REVOLTED AND TAKEN BARNEY OFF THE AIR?

Do you have a burning question about children’s TV?

This post will be linked to Top Ten Tuesday at OhAmanda.

Don’t miss any episodes of Mama Loves Her Shows. Set your blog DVR and subscribe by e-mail or RSS feed.