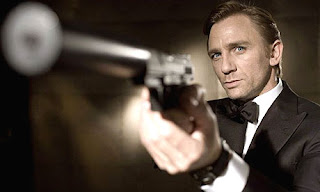 On Saturday night, Mark, Smitty and I went to see the latest James Bond movie. It was only right that we see it together, since long, long ago we began the tradition of watching Bond movies together.

Just kidding. That’s not actually true at all.

However, one brisk night two years ago, as we sat in a booth at Perkin’s eating some delightfully fried food and discussing the recently released Casino Royale, we decided to go see how Daniel Craig pulled off Bond. That night. Right then. At 10:00.

What can I say? We were younger then.

This time, we’ve been planning for months. Planning around Smitty’s school schedule, Mark’s football schedule (no, not for a team he plays on, for the team he roots for), and finding a babysitter for Photobaby. At one point we were even going to see an afternoon movie. While it was still light out (and tickets cost just $5)! But finally, we decided on Saturday night after Thanksgiving.

So, Mark took Photobaby to his brother’s house, and I dragged my flu-y self into the shower. Smitty arrived on time, bless her optimistic heart, and watched a little VH1 while I finished getting ready. Then I wrote down several movie time options on a Post-it, and we were off to the movies. Well, really, we were off to eat dinner, a process that involved a lot of this. Finally, we picked a place and made our way to the theater.

[Side note: As evidence that Mark and I were, indeed, sick, you should know that we split a hamburger and waffle fries between the two of us. And neither one of us could even finish our half. And we turned down spinach-artichoke dip. Yep, we were sick. But after all that planning, nothing was getting in the way of our movie date!]

The movie was pretty good. Not as dark (or violent) as I’d feared after reading reviews. But also not as good as the Bourne series, in my mind. An interesting point, actually, that I would compare it to the Bourne Identity movies. Because one of the reviews I read noted that while Bond movies have traditionally been light, quippy films full of pretty girls, fancy cars and innuendo, the Daniel Craig Bond is dark, dangerous and quite similar to Jason Bourne. But that’s okay – I didn’t expect greatness, just a good time. And enjoy the movie we did.

But what I really want to tell you about are the previews. Oh, the previews! I have never gone to a movie that showed so MANY! Don’t get me wrong – I love previews. I was just shocked that they took up 20 minutes of my movie time! Here are the ones I can remember and my impressions:

See what I mean? That’s a lot! We might have seen one for Benjamin Button, but I’m not sure. That movie creeps me out, so I may have blocked it from my memory.

Seen any good previews lately? What upcoming movies are you looking forward to?