I wish I’d never seen it… 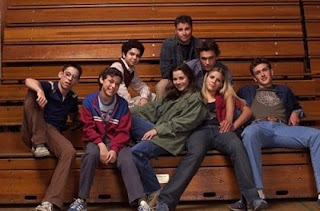 In the last episode of Freaks and Geeks, Mr. Rosso loans Lindsay the Grateful Dead’s album, American Beauty. A Deadhead in the cafeteria spies the record that Lindsay’s holding and says that American Beauty is so great that she wishes she never heard it…just so she could hear it for the first time.

That’s how I feel about Freaks and Geeks.
Just two short weeks ago, I had not watched a single episode of this 1999 cult hit. The Judd Apatow series has been lauded by many, including my friend Triple, who has been telling me for years that I’d love it.
And I’ve been telling her for years that I’m sure I would, and I would love it, and I promise I will watch it. Someday.
Triple’s known me for quite a while. So she wisely took matters into her own hands, getting together with Chelley to give me the entire series on DVD for my birthday.
With no excuses left, I went about watching Freaks and Geeks like I do with any tasty treat. I savored it bite by bite, taking time to fully appreciate the flavor and texture of each morsel.
Ummm, no. I devoured it. Gulped it down, forgetting to breathe or eat or sleep for the good part of two weekends.
And just like that, it’s over. I’ve watched the whole series, all 18 episodes. At first I thought about saying it’s like Wonder Years meets That 70s Show, but it’s really more than that. It was possibly the most realistic and evenly acted portrayal of high school I’ve seen. Kind of the anti-Dawson’s Creek. (Not that I didn’t love me some Dawson’s Creek, because ummm, I did.)
But now it was all gone, never to be seen again. Well, that’s not true. I can watch it any time I want. Plus, the DVD set has hours of extras – deleted scenes, interviews and commentaries. So I will actually be enjoying the antics of Lindsay, Sam and their friends for, quite possibly, years to come. In the meantime, brace yourself. I’ve received much wisdom from these 18 episodes, and it is my duty, nay, my honor to pass it along.
Not today, though. I don’t actually feel all that wise today. Maybe tomorrow.
For today, let me just say that I had no idea how many people had starred or appeared on this show! Even Ben Stiller appeared in the last episode. Here’s a quick list of the actors I recognized (and what I knew them from before F&G entered my life):

[Note: If you’d like to learn more about this show and/or the DVD, I recommend going here for a better review than you’re ever going to get out of me.]

This post is part of Works for Me Wednesday (as in, this TV show certainly worked for me!). For more relevant life-enriching tips, head over to Rocks in My Dryer.